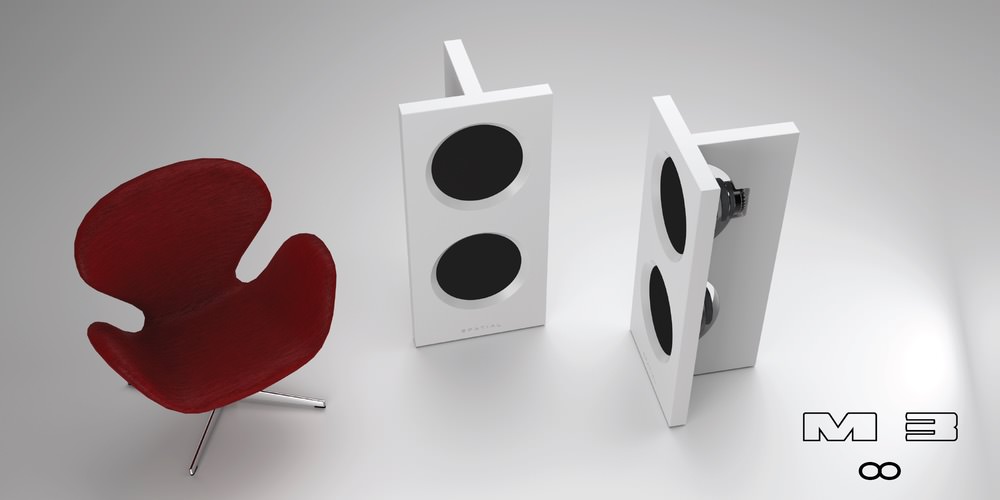 Spatial Computer has just released a floorstanding, open-baffle loudspeaker for $1500 a pair. I just heard them at the Newport High-end Audio Show, where they instantly stand out as the best bargain at the show. The M3’s are not a conventional speaker, mainly because they’ve eliminated the box. Development of a passive, plug and play open-baffle speaker has been ongoing since 2011 and represents Clayton Shaw’s first major step forward in his open-back design technique since the original Emerald Physics CS2 in 2007.

“Hitting a $1500 price point was largely achieved by mass production,” said designer Clayton Shaw. He went on to say the M3 is essentially the same loudspeaker as the identical looking $4,000 Hologram M1 speaker the company previously released. I believe he said both speaker drivers were exactly the same, and the only difference was the finish. The M1 wasn’t there to compare, so I don’t know for sure. 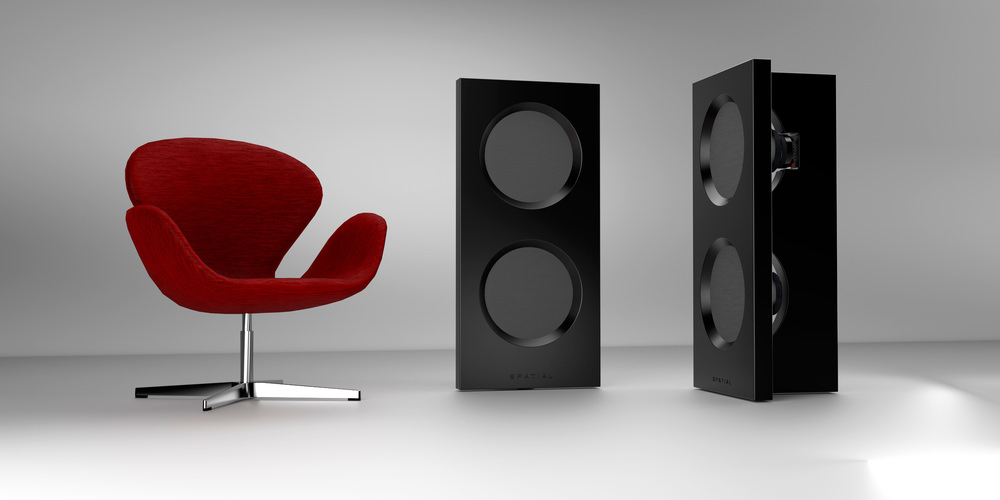 First Take Review
My first impressions listening to Hologram M3 speakers at The Show was overwhelmingly positive. In the few tracks I listened to, I could hear the quick plucking of guitar strings, smooth vocals, with very quick, clean bass. Yet despite their large size, you won’t feel like you’re getting blasted out of the room. Somehow the music blended seamlessly into the room. There is definitely an audible difference over regular box speaker listening. I would simply say M3 loudspeakers are surprisingly good and well worth an audition or purchase.

• Open Baffle Design – Eliminating the speaker box dramatically improves the sound of a speaker by eliminating all manner of box related resonances and re-radiation of sound from inside the box. A free-flowing ease and dimensionality is immediately recognizable as more like actual music and less hifi sounding. Bass is extremely detailed and realistic sounding, while the midrange is portrayed naturally, with an open, 3D presentation. The challenge of creating an open-baffle speaker with powerful bass is especially daunting, The Hologram series succeed in producing unprecedented bass performance in a compact form factor.

• Point Source Design – A properly designed point source driver provides a coherent transition from midrange to treble and stable imaging by eliminating comb-filtering; the interference patterns found when the  tweeter is physically separate as in most speaker designs.

• Controlled Directivity Design – Dispersion angle is limited to around 80 degrees and held constant across the spectrum, allowing less interaction with the room and much more even response in reflected field energy.

• Linear Response – Uniform frequency response is critical to accurate music reproduction. Great care has been taken in voicing in the effort to reproduce natural pitch and tonal balance.

The idea with controlled directivity is to create a situation in the room where the frequency response shape (and therefore tonal balance) of the direct field is similar to the reflected field. In domestic listening environments, the walls and floor/ceiling boundaries are close to the speaker, so the manner in which the speaker interacts with the boundaries plays a determining role in the final sound quality in a given listening room.

Conventional box speakers with surface mounted mid and treble drivers typically have very uneven frequency response off-axis. Unfortunately, this uneven response pattern is being reflected off the boundaries, which is then mixed with the on-axis, direct radiation coming from the speaker. The summed response at the listener position is one of degraded quality compared to the direct field alone. Additionally, the reflected field energy is arriving later due to the extra distance traveled, causing a number of time domain related problems such as blurred imaging and poorly constructed soundstage projection. The sound also takes on the character of the room more than is desired, creating inconsistancy from one installation to the next. Loudspeaker manufacturers really have no idea what their customers are hearing due to room interaction being such a large factor.

The best known way to address this problem is to employ controlled directivity principles, which are well known and highly developed in professional audio, such as in studio monitors and live sound applications. As applied to the home listening environment, this means that the dispersion angle is narrower and more consistent with frequency, with less energy hitting the side walls and floor/ceiling boundaries. Spatial aims to produce an 80 degree pattern that drops off quickly beyond that point and has a frequency response shape close to the on-axis response. Spatial can’t eliminate energy bouncing off boundaries, but they can reduce the level, which increases the ratio of direct to reflected field energy. Then, the summed response at the listener position is similar to the quality one would expect in a near-field listening arrangement. This, in effect allows the listener to hear the speaker itself, instead of such a strong mix of the speaker and room.

Spatial achieved broadband uniformity of directivity by controlling the radiation angle specific to the differing properties of bass, mid and treble. Open-baffle bass provides directionality in the bass region where the wavelengths are very long, the large mid cone controls the angle in the midrange by virtue of its size compared the wavelengths of the mids, while the same cone provides a waveguide function to the point source compression tweeter. The Hologram achieves these objectives in a surprisingly simple and compact package.

Price and Availability
The Spatial M3 Loudspeakers are available now factory direct only at https://clayton-shaw.squarespace.com/store/hologram-m3 in two configurations:

Turbo version adds premium crossover components such as premium capacitors and German WBT Binding Posts. A 45-day trial period allows you to experience the Hologram in your own home without risk.