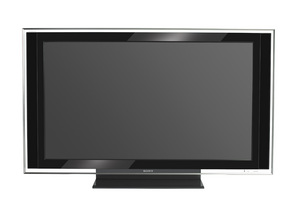 “Our BRAVIA LCD HDTV’s offer superior picture quality and unlock the power of the high-definition experience with more than five times the number of pixels compared to enhanced-definition plasma televisions. Paired with our forthcoming Blu-ray Disc player, consumers will see a level of high-definition video unmatched in the home theater,” said Randy Waynick, senior vice president of the Sony Electronics’ Home Products Division.

Stunning picture quality is not the only feature that sets the BRAVIA line apart. The new XBR models feature an elegant floating glass design that is sure to inspire novice interior decorators to rethink the modern home.

“BRAVIA TV’s were designed with the critical eye in mind,” Waynick added. “The art of building a television is not limited to the components inside but also the aesthetic beauty that completes the package as these new models attest.”

At the top of the new line is the XBR3 series including the 46-inch KDL-46XBR3 and 40-inch KDL-40XBR3. With native 1920 x 1080 panel resolution and three HDMI inputs with 1080p capability, the sets are compatible with full high-definition signal sources, such as Sony’s BDP-S1 Blu-ray Disc player, which is targeted for shipment to retail late this summer.

In addition to the piano black XBR3 models, the new XBR2 BRAVIA models feature the same 1920 x 1080 screen resolution, BRAVIA Engine Pro, HDMI inputs with 1080p capability and elegant floating glass design. However, these two models — the 46-inch KDL-46XBR2 and 40-inch KDL-40XBR2 — feature a silver bezel that can be replaced by one of five different colored bezels for custom integration into any decor.

Rounding out the XBR2 line is the 32-inch KDL-V32XBR2 model featuring a 1366 x 768 screen resolution. It is equipped with Sony’s BRAVIA Engine and Live Color Creation, which delivers a sharp and rich picture from standard definition sources as well as high-definition.

The KDL-V32XBR2 set ships in September and will be available for about $2,500.

Next in the BRAVIA line is the V2500 series, including the 46-inch KDL-46V2500 and 40-inch KDL-40V2500. These 1920 x 1080 native high-definition resolution models are equipped with two HDMI inputs with 1080p capability and the BRAVIA Engine and Live Color Creation technologies.

All new BRAVIA televisions, including the previously announced S-series and U-series models, are available through sonystyle.com, at Sony Style retail stores (www.sonystyle.com/retail) and at authorized dealers nationwide. More information on the new line can be found by visiting www.sony.com/2006TV.