The STR-DH500 is a 5.1 channel receiver with 3 HDMI inputs and 1 output (switcher). It features Digital Cinema Auto Calibration and Digital Media Port, which allows you to release your music from your portable music players and PC via an optional adapter.

For those looking for more features, the STR-DH700 offers 7.1 channel with 3 HDMI inputs and 1 output (repeater). In addition to STR-DH500’s specification, the STR-DH700 supports x.v.Colour, Deep Colour and bi-amplification. With bi-amplification, separate power stages drive the low frequency and mid/high frequency outputs. It also supports S-AIR — the wireless rear speaker solution from Sony that brings true flexibility and convenience to home cinema configuration.

The STR-DH700 will be available later this month for about $300.

At the top of the DH range is the STR-DH800, completing the specification with 4 HDMI inputs and 1 output (repeater) and High Definition audio codecs Dolby True HD and DTS HD Master Audio. 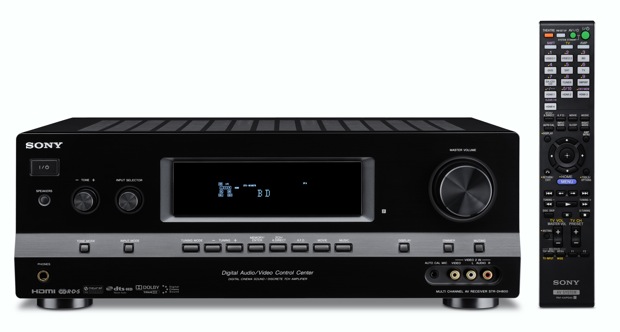 The new 7.1 channel STR-DH800 (110 watts power per channel @ 8-Ohms, 1kHz, 1% THD) A/V receiver also supports the latest advanced audio codecs. This model, also with a sleek new chassis design, features four HDMI and three component inputs for all high-definition needs. It also accepts 1080/60p and 24p signals via HDMI with x.v.Color and Deep Color compatibility. It is both S-AIR and Sirius ready, and has a Digital Media Port connection. This new receiver will be available this June for about $400.