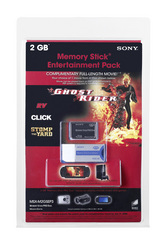 With the launcher DVD loaded into a personal computer, one of the four movies can be transferred from the DVD to the Memory Stick media, using the provided unlock code. Each movie is optimized for playback on the Sony PlayStation3 console at 720 x 480 resolution and the PSP.

Sony has also unveiled tiny 2GB and 4GB Memory Stick Micro™ media cards particularly for use with Sony Ericsson and other cellular phones. With the included adaptor, Memory Stick Micro media can also be used with Cyber-shot digital cameras and Handycam camcorders that have a Memory Stick PRO Duo slot.

The 2GB Memory Stick Micro media card, MS-A2GD, is available now for about $55. The 4GB card, MS-A4GD, will be available in November for around $90.

All of these Memory Stick products can be purchased online at sonystyle.com, across the country at Sony Style retail stores (www.sonystyle.com/retail), at military base exchanges, and at authorized dealers nationwide.