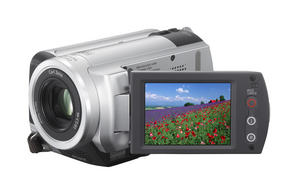 Sony’s U.S. camcorder business is getting a boost from the growing popularity of video websites, such as YouTube™, MySpace™ and Grouper™.

More than 35 percent of U.S. adult Internet users — approximately 48 million — have posted video online this year, according to the May 2006 Pew Internet and American Life Project, which points to the popularity of user-generated content on the Web.

“Video has finally taken its rightful place alongside of still images on the Internet,” said Linda Vuolo, marketing director for camcorders at Sony Electronics. “People are now capturing video more frequently in their everyday lives, and this is good news for the camcorder business.”

According to the latest market research from The NPD Group, the hard disk drive camcorder category has grown 347 percent in the United States since last September. Sony started selling hard disk drive camcorders just six months ago, and has already grabbed 60 percent of this market in unit share. Sony also leads the total U.S. camcorder industry with 50 percent dollar market share for all camcorder sales as of November.

“People like hard disk drive camcorders because of their long recording times and nearly effortless transfer of footage to PCs,” said Stephen C. Baker, NPD’s vice president of industry analysis. “We can only see an upward trend for this category.

Sony views its recent success in the category wholly based on the strength of its new product line.