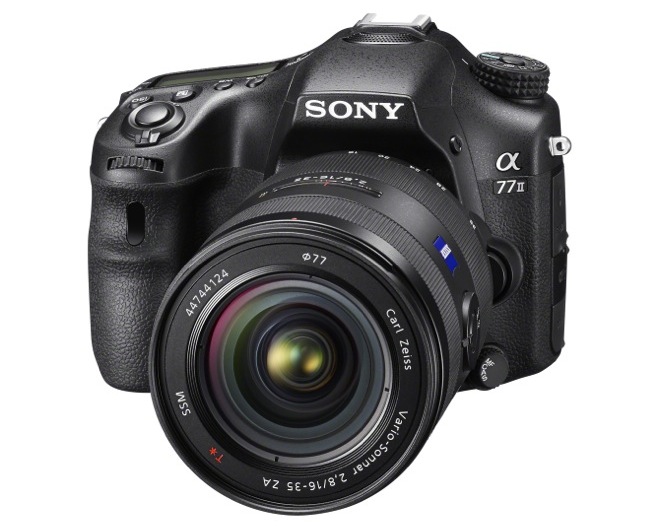 Sony just announced the $1,200 Alpha 77 II, a 24-megapixel interchangeable lens camera with a record-breaking 79-point autofocus system using 15 cross points, plus 12 fps shooting for up to 60 frames with continuous AF.

The speedy new camera is equipped with a high-resolution 24.3 MP image sensor and powerful BIONZ X processor, ensuring that still images and full HD videos are captured in sharp focus and incredible detail. Image quality compared to the original α77 has been boosted, and sensitivity has increased by approximately 20% as well. There is also a variety of new pro-friendly video functions for movie makers.

The a77 II camera also has a centrally mounted dedicated phase detect AF sensor that supports apertures up to F2.8, ensuring maximum AF precision when using large-aperture lenses. In low light, the AF system of the camera performs admirably, accurately locking on to subjects in scenes with illumination levels as low as EV-2 (ISO100), where even the human eye has trouble discerning details.

There’s a suite of sophisticated new AF functions on the a77 II model that make the most of the unique 79-point system. Expanded Flexible Spot mode maintains focus even if the selected AF point loses track of the subject, activating eight surrounding AF points that recognize the subject. Lock-on AF mode lets users select one of four AF area modes (Wide, Zone, Flexible Spot or Expanded Flexible Spot), and can recognize and track a subject’s form based on its color and its position within the frame, automatically selecting the appropriate AF point from the 79 available.

For even greater control, the degree of subject-tracking duration can be fine-tuned in five steps (when shooting still images in AF-C mode). A low setting is ideal for slow-moving subjects with predictable movements, while high settings deliver more responsive focusing for shooting different subjects at different distances, such as wildlife or sports photography. AF Tracking Duration can also be selected between High, Medium and Low during Full HD movie shooting.

Other new features include an Eye AF function that precisely detects and focuses on the subject’s eyes when photographing people. There is also AF Range Control, which allows AF to be limited to a specified range, and a Balanced Emphasis mode that provides the ideal balance between focus and release timing. Users can manually select any of the various focus modes to match the shooting situation and their creative objectives. 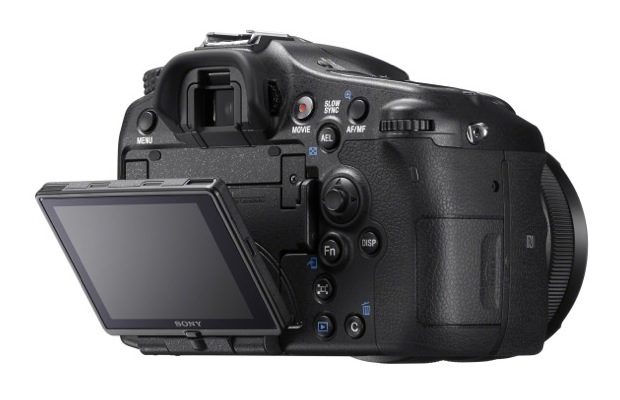 Continuous shooting stamina on the α77 II camera outpaces nearly all cameras in its class as well as many professional cameras. The new model can capture a non-stop burst of up to 60 full-resolution JPEG images at a maximum continuous shooting speed of approximately 12 frames per second with continuous AF (in Continuous Advance Priority AE mode).

The new 24.3 megapixel Exmor CMOS image sensor in the a77 II camera features the same gapless on-chip lens structure as used in the acclaimed a7R and a6000 models. Thanks to an array of latest-generation imaging innovations, the sensor now offers 20% greater sensitivity than its predecessor (a77), and ensures flawless image detail and low-noises performance across the wide sensitivity range of ISO 100 to 25600.

The high-resolution sensor is partnered by the same evolved BIONZ X image processor introduced in the α7 and α7R models. Around three times faster than Sony’s previous BIONZ engine and optimized for the α77 II camera, it employs detail reproduction, diffraction-reducing and area-specific noise reduction technologies that contribute to amazing image definition and rich colors for still images and Full HD videos. 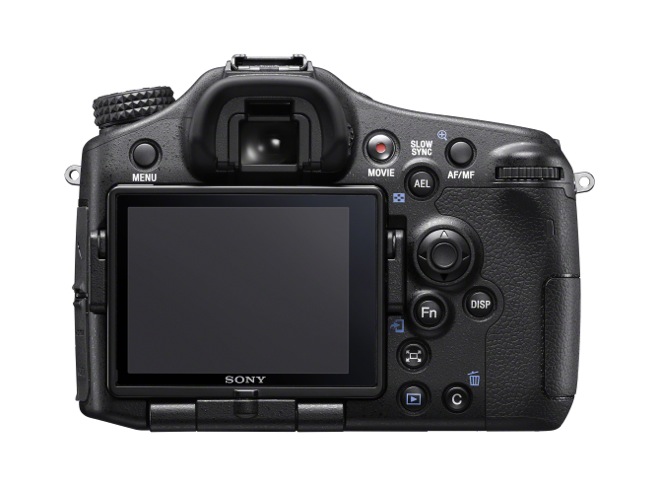 The new camera features a crisp, bright XGA OLED Tru-Finder with 236,000 dot resolution. With about three times higher contrast and resolving power compared to the original a77, the EVF on the new a77 II shows the effects of all settings adjustments in real-time, accurately displaying what the final image will look like. A wide viewing angle and high eye-point are complemented by a newly-expanded choice of brightness settings, and shooters have the ability to manually adjust color temperature for comfortable, accurate composition.

As featured on the full-frame a99 camera, the a77 II model also features a detail-packed 3.0-type (7.5 cm) Xtra Fine LCD that moves three ways for added convenience. The LCD also features WhiteMagic technology, which significantly improves screen visibility, even outdoors in direct sunlight.

Evolved from the original a77 model, there are separate control dials on both sides of the grip for simpler control settings adjustments. In total, the a77 II camera has a total of 11 customizable buttons with up to 51 assignable functions. 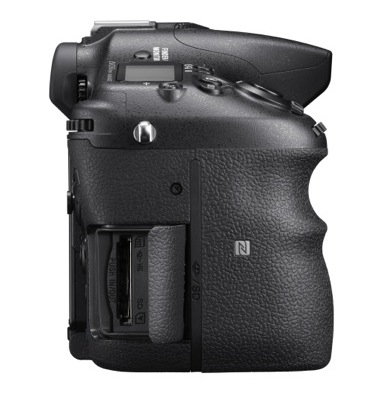 Further, up to three frequently used groups of shooting modes and other settings can be stored in memory and recalled easily via the mode dial, and an exposure mode dial lock function has been inherited from the a99 model to prevent accidental mode changes.

The tough, light magnesium body of the α77 II camera is engineered to withstand the demands of the most serious enthusiasts. It features a dust and moisture sealed design and a large, contoured grip for comfortable handling. In addition, the camera’s durable shutter unit is rated for 150,000 total shots.

The camera has a number of additional features for serious movie makers, including three-level AF tracking sensitivity adjustment, a pro-style Zebra function and audio level metering. There’s also the addition of a clean HDMI® output that allows viewing on an external monitor and recording to an external storage device without compression 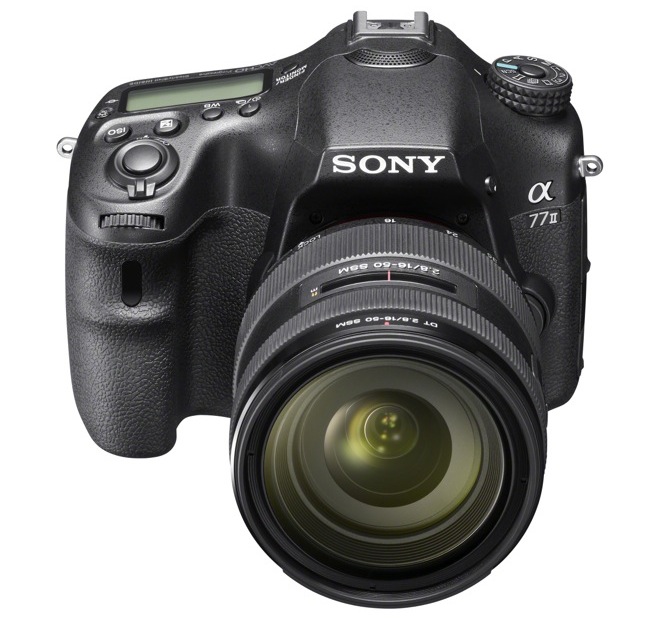 On-board Wi-Fi allows one-touch connection for easy shot sharing with your smartphone or computers. A single touch also activates Smart Remote Control, linking the camera to your mobile phone enabling you to fire the shutter from a distance.

The new a77 II camera is compatible with a range of versatile α accessories including microphones, flashes and more, and is designed to work the optional VG-C77AM grip, which enhances camera operability and versatility during vertical shooting.

What Digital Camera7 years ago
You Are Here