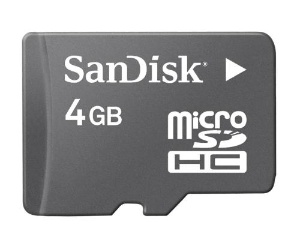 As Consumers Use Their Phones as Their Music Player, Camera and Video Recorder, High-Capacity Cards Are A Growing Requirement

SanDisk Corporation (NASDAQ:SNDK) today introduced a 4-gigabyte (GB)(1) microSD High Capacity (SDHC™) card –the largest capacity of the world’s smallest removable flash memory card. A 4GB microSDHC™ card can store more than 1,000 digital songs or more than 2,000 high-resolution pictures or up to 8 hours of MPEG 4 video(2). SanDisk made the announcement at 3GSM World Congress 2007, where it is demonstrating products in Hall 7, booth 7C62.

SanDisk is now sampling the new 4GB microSDHC card to OEMs such as major phone manufacturers and mobile network operators (MNOs). Engineering samples are now available for evaluation, as mobile phone makers will need to upgrade the firmware in their handsets so that memory slots can support the new card.

SDHC is the new designation for any SD™ or SD-based card that is larger than 2GB and adheres to the new SD 2.00 specification that is required for cards and hosts to support 4GB to 32GB capacities. The specification was developed by the SD Association, an industry standards board, which also defined three speed classes for speed and performance capabilities. These cards adhere to the SD Speed Class 2 Rating specification which defines a minimum sustained transfer speed for SDHC cards.(3)

Retail release of the card is planned for later in 2007. OEM pricing has not been determined yet.

In line with the announcement of the 4GB microSDHC card, SanDisk is offering various capacities of microSD™ cards in a Mobile Memory Kit. Each package contains both miniSD™ and SD adapters, so that consumers can select the appropriate card for their use without being influenced by card size. With SanDisk adapters, microSD and microSDHC cards can be “stepped up” to fit into a variety of other electronics devices that have miniSDHC and SDHC slots.

Apart from handsets, microSDHC cards also can be used in some digital audio players, such as SanDisk’s Sansa c200 and e200 series MP3 players.

SanDisk is the original inventor of flash storage cards and is the world’s largest supplier of flash data storage card products, using its patented, high-density flash memory and controller technology. SanDisk is headquartered in Milpitas, CA and has operations worldwide, with more than half its sales outside the U.S.

(3) The 4GB SanDisk microSDHC card is rated Class 2, a guaranteed minimum data-transfer rate of 2MB/sec. This rate is guaranteed based on the conditional access method specified by SD physical specifications.