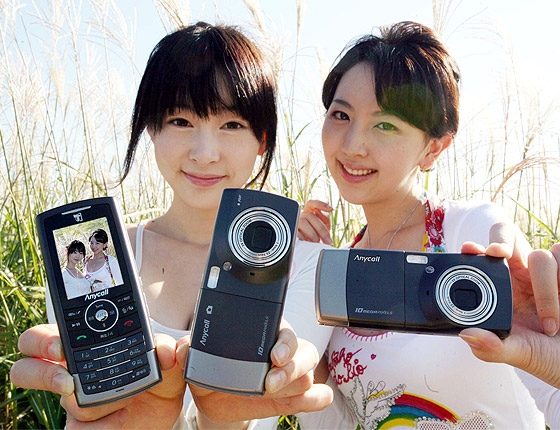 The B600 offers the same level of picture-taking sophistication that a 10 megapixel digital camera offers. The camera function includes 3x optical zoom and 5x digital zoom. It also has auto focus and a flash unit that performs optimally for 10 megapixel photographs.

Also, the B600 comes fitted with a LED autofocus feature which assists users to capture clear, crisp photos even in dark settings. Located next to the lens, the LED autofocus automatically determines the distance and utilizes the appropriate focus setting for optimal photo shooting.

It also supports Bluetooth which enables users to send pictures wirelessly to other mobile phones, printers or to Bluetooth headsets.

The high color Reproduction TFT-LCD produces the highest possible display for its size. The photo-fine chromic LCD can reproduce 16 million colors, virtually any color found in nature, earning it the “True Color” appellation. Moving pictures can be recorded in QVGA resolution at 15-30 frames per second. Users can watch live TV in crisp picture through Satellite DMB function.

It also supports external memory (MMCmicro) in addition to its internal memory. The mobile phone supports a TV-out function where users can connect their phones to view still or motion pictures.

The B600 comes with a design reminiscent of a real digital camera. The front is designed as a bar-type mobile phone, while the back side is used as the digital camera.

Other advanced functions in the B600 include an MP3 player, business card reader, and 128 polyphonic sounds.