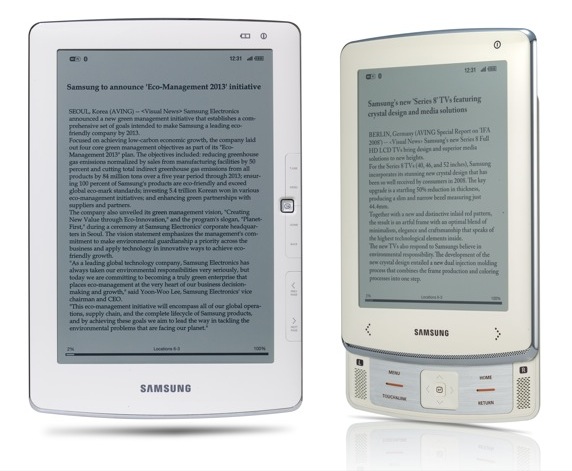 First E-Book for Reading, Writing and Sharing On-the-go With a Precision Stylus Pen

Samsung just unveiled its first e-book devices, with six-inch and ten-inch screen size offerings, at the 2010 International Consumer Electronics Show (CES) in Las Vegas. The E6 and E101 further solidify Samsung’s position as a global leader in display technology by raising the bar on the quality of writing capabilities for e-books.

“We’ve used our expertise to create a high-quality e-book with today’s on-the-go consumer in mind,” said Young Bae, director of display marketing, Samsung Information Technology Division. “Samsung is addressing a common frustration that users experience with many of today’s digital readers with a stylus that allows them to annotate their favorite works or take notes. Coupled with wireless functionality that enables sharing of content, this is a truly multi-faceted device. .”

Handwriting Capabilities
Unlike other e-book devices, Samsung’s E6 and E101 enables handwriting directly onto the display, allowing users to annotate their reading selections, calendars and to-do lists with a built-in electromagnetic resonance (EMR) stylus pen. This dedicated pen prevents mistypes caused by hands and other objects that may graze the screen’s surface. A variety of pen and eraser thicknesses make the Samsung e-books perfect for drawing and writing.

Low Power Consumption
The Samsung e-book displays reflect light naturally and deliver an appearance similar to that of printed paper, allowing people to read more naturally than they would with other backlit electronic paper devices. The E101 boasts a ten-inch screen, while the E6, is the more portable sibling at six inches. Because Samsung’s e-book is not backlit, the power consumption is lower than that of other portable display devices. Only four hours of charging prepares the battery for up to two weeks of use, depending on the extent of daily use.

Bluetooth and Wi-Fi Wireless
Samsung’s e-books are equipped for wireless connectivity as well. Wi-Fi 802.11b/g allows users to download content such as books and newspapers from a server wirelessly, as well as to share certain content with other devices. Bluetooth 2.0 is also a built in feature.