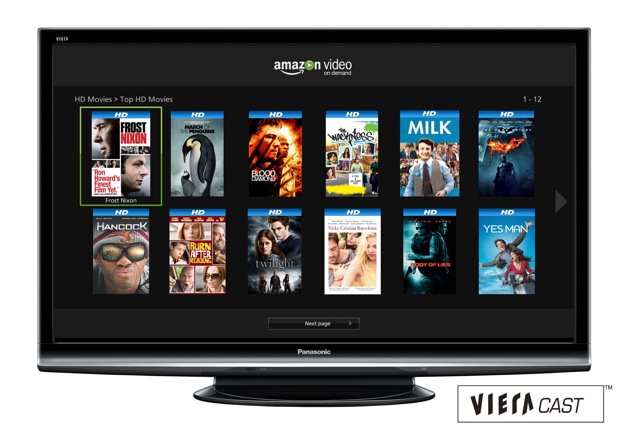 For 2009, Panasonic’s VIERA CAST feature has been extended to three VIERA Plasma HDTV series. Panasonic and Amazon are also working to bring the Amazon Video On Demand service to Panasonic’s 2009 line of VIERA CAST-enabled Blu-ray Disc players by this summer.

VIERA CAST was widely acknowledged last year for its distinctive internet application, allowing the consumer to view targeted sites on a large HDTV, rather than a small computer screen. VIERA CAST is also unique in the industry in that, unlike other internet-enabled HDTVs, it has a built-in Ethernet interface – no external box or PC is required. VIERA CAST is accessed via a single button on the television remote control and there is no fee to use the VIERA CAST functionality.

“In talking to our consumers, Panasonic identified a strong desire to have access to a wide range of video on demand services directly through their television,” said Merwan Mereby, Vice President of New Business Development, Panasonic. “The addition of Amazon Video On Demand’s premium service to our VIERA CAST offerings delivers the ultimate entertainment experience to consumers. VIERA CAST owners now have access to Amazon’s vast collection of movies and TV shows, including HD quality new releases, as well as the extensive, consumer-generated content VIERA CAST already offers via YouTube and Google Picasa. Through VIERA CAST, Panasonic now offers consumers access to the most comprehensive library of entertainment content out there, all from the comfort of their couch.”

“Both Panasonic and Amazon Video On Demand have built a great customer experience that easily allows customers to shop, purchase or rent from our library of over 40,000 movies & TV shows with no subscription fees,” said Bill Carr, Amazon Vice President Music and Video. “Using Panasonic’s line of VIERA CAST HDTVs, customers will also be able to experience Amazon’s compelling HD quality new release movies and TV shows from their living room.”