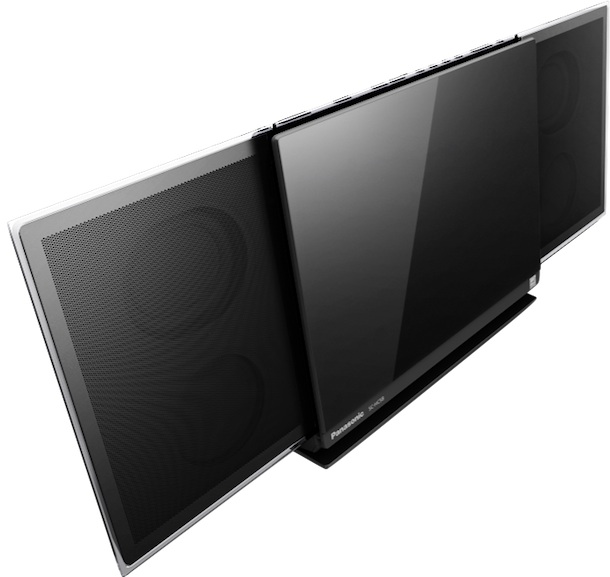 Panasonic just announced the SC-HC58 (pictured above), SC-HC38 and SC-HC28 speaker docks with lightning connector for use with the iPhone 5 or latest iPod/iPad. The new HC Series micro stereo systems improve upon 2012 with both high-quality sound offerings and smart networking.

The HC58 features the Nanosized Bamboo Cone Speaker and also includes a Dual Passive Radiator and Direct-Vocal Sound (found on HC38 as well). Networking capabilities are also further advanced with a re-mastered Bluetooth on the HC58 and HC38, easy setup for AirPlay (HC58) and iPod/iPhone/iPad Connection through USB (HC58 & HC38) as well as a lightening pin connection on the HC28 to work with the iPad mini/iPhone5. These sleek and slim devices featuring a pure direct sound system also include high-quality metal to enhance the luxurious look of the product. The HC58 and HC38 can be wall-mounted with brackets included.

Additional advancements to Panasonic’s 2013 compact audio lineup includes the new Panasonic Music Streaming App (not available on the HC28), allowing users to wirelessly stream music from a smartphone or tablet with just the press of a button. The app, which is available in the Apple Store or through Google Play, provides users the option to choose which device they want to listen to their music on without the need for a physical connection to the device. Once the app is installed, a user can select from a list of all available devices and begin transmitting music wirelessly to audio devices. The Panasonic Music Streaming App is available through DLNA, Bluetooth or AirPlay.

Availability
The Panasonic 2013 HC Series iPod speaker docks will be available in March 2013.