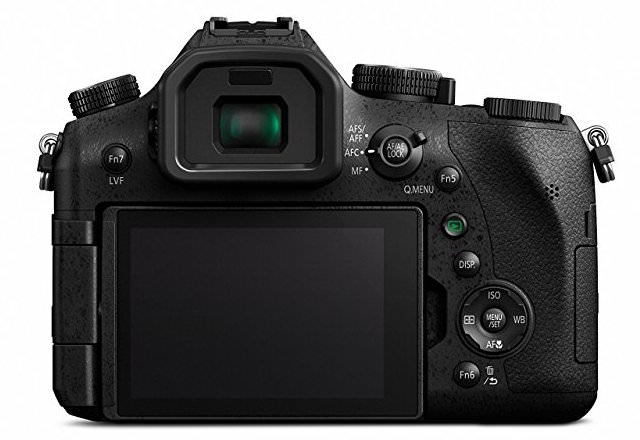 A 9-blade aperture diaphragm achieves a soft, rounded defocus, smoothly catching up with sudden changes in brightness thanks to the use of a new galvanometer-type actuator, which is also used in professional camcorders. It assures smooth, seamless iris control even while zooming.

By combining the built-in ND filters, 4 setting modes for ND filters are available with direct switch operation: -2EV(1/4), -4EV(1/16), -6EV(1/64) and AUTO (Works for still image recording). Users can record videos while keeping the exposure level the same with a fixed shutter speed or with a fully open aperture even in high brightness.

High Quality Video Recording
The LUMIX FZ2500 boasts an exceptional video recording performance that has never been seen before in any compact digital camera. It is capable of unlimited 4K video recording (Cinema 4K: 4096×2160 / 24 fps and QFHD 4K: 3840×2160 / up to 30 fps) in MOV/MP4. The LUMIX FZ2500 is also capable of Full-HD video with an ultrahigh bit rate of 200 Mbps (ALL-Intra) or 100 Mbps (IPB), with no limit on recording duration. Users can freely choose the format from MOV, MP4, AVCHD Progressive and AVCHD at a variety of frame rates according to the application. For the global business of professional users, the system frequency can be flexibly selected from between 59.94Hz (23.98Hz) / 50.00Hz / 24.00Hz.

The LUMIX FZ2500 is also capable of live image output to the external monitor in 4:2:2 / 8-bit via an optional micro HDMI cable simultaneously while recording video. Even 4:2:2 / 10-bit is available which is suitable for professional video making that requires serious monitoring of footage. Users can choose to output only the recording content or the content with setting menus individually depending on the display. 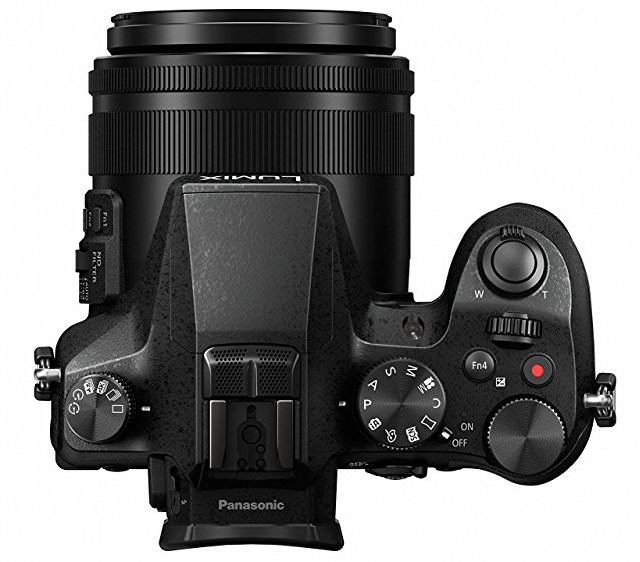 To elevate the video expression performance even more, a variety of effects are available on the LUMIX FZ2500. The VFR (Variable Frame Rate) lets users record overcranked / undercranked video, all in Full-HD. Max.5x slower effect is available in 24p at 120 fps. With the newly added Slow & Quick, users can apply a slow or quick motion effect with a press of the Fn button during recording. It is easy to activate 50% slow motion (120 fps) or 200% quick motion (30 fps) recording mode while recording at 60 fps. It is also possible to change the background’s angle of view and make it wider without changing the size of the main subject with a Dolly Zoom. Time Lapse/ Stop Motion Animation video can also be produced inside the camera.

The LUMIX FZ2500 incorporates a dedicated linear motor into the focus system to achieve ultrahigh-speed AF with DFD (Depth From Defocus) technology which shortens the focus time. It calculates the distance to the subject by evaluating two images with different sharpness levels at a high 240-fps signal exchange speed. As a result, the LUMIX FZ2500 achieves ultrahigh-speed AF of approx.0.09 sec and high speed burst shooting at 12 fps (AFS) / 7 fps (AFC) to capture fast-moving subjects in crisp focus up to 100 (JPEG) / 30 (RAW) images. 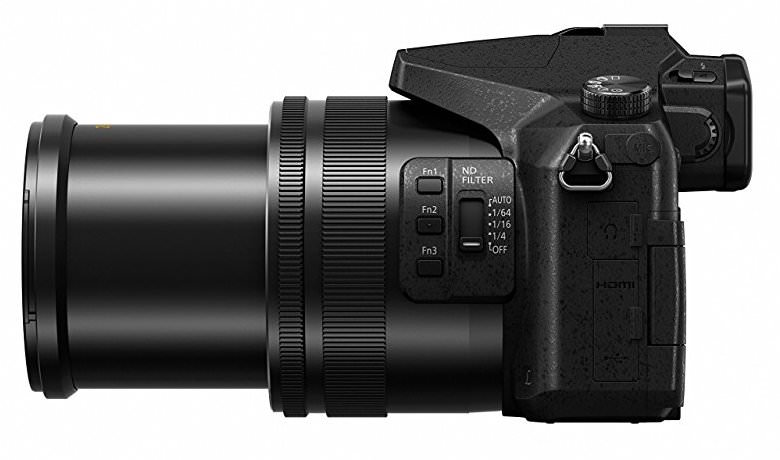 Thanks to this 4K technology, users can experience 4K PHOTO to capture fleeting photo opportunities at 30 fps by extracting the frame with the most photogenic image out of the 4K burst file to save as a photo. Plus, multiple images can be saved as 4K PHOTO shots all at once in the LUMIX FZ2500. A maximum of 150 frames in five seconds following a designated frame can be saved. Users can check these images on a large PC monitor and select the best shot after shooting.

The LUMIX FZ2500 comes with the Post Focus function that lets users select the in-focus area even after shooting. This is helpful especially in macro shooting where strict focusing is required or for changing expressions by changing the focused subject. This function was developed by combining high-speed, high-precision DFD (Depth From Defocus) auto focus technology and 4K technology.

The newly integrated Focus Stacking function enables users to adjust the depth of field after shooting by combining multiple images shot with Post Focus function inside the camera. Users do not need to focus severely while shooting because they can get the image with the defocus that they want, or a pan-focused image, by simply selecting the focus area after shooting. This is beneficial when shooting macro shots of insects, small accessories and so on.

The 4K PHOTO and Post Focus menus are available on the drive dial for users to activate them more quickly.

Solid Design with Intuitive Control
The LUMIX FZ2500 offers both a sleek, solid exterior design and intuitive control. The dual dial control system around the barrel of the large-diameter LEICA DC lens enables focusing and zooming, and the 4 ND filter setting modes can be changed quickly with a switch that is also located on the lens barrel. The well-defined grip provides a stable hold with minimum fatigue despite its substantial weight. The front/rear dual dial system enables direct setting of the shutter speed and aperture. And the optimal dial, button, lever and switch layout allow intuitive control with comfort in both photo and video shooting.

The LUMIX FZ2500 has a large LVF (Live View Finder) with a high magnification ratio of approx. 2.18x / 0.74x (35mm camera equivalent in 4:3). The high-precision, high-speed OLED (Organic Light-Emitting Diode) display features 2,360K-dot high resolution and 100% field of view. Adoption of the OLED for the LVF achieves high-speed response with minimum time lag of less than 0.01 sec as well as 10,000:1 high contrast for exceptional visibility. With an eyepoint of approximately 20 mm, it also offers high visibility with comfort for users wearing glasses. It is always sharp and clear from the center all the way to the corners. 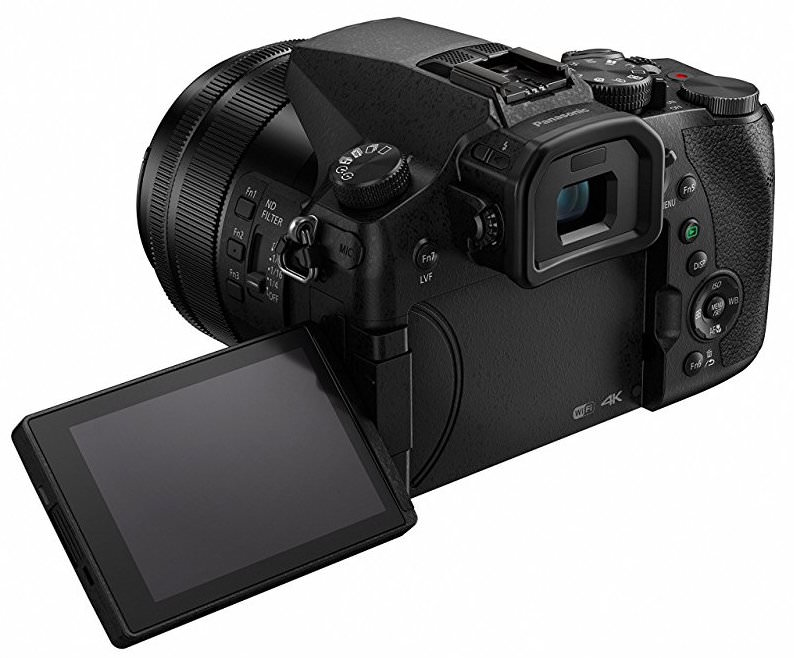 Equipped with a static-type touch-control system, the 3-inch free-angle rear monitor with 1040K-dot high resolution features approx.100% field of view. It tilts up and down by 270 degrees, which enables shooting at either a high or low angle even easier. The touch-control system lets the user immediately focus on the subject and even release the shutter by simply touching the screen. Touch Pad AF makes it possible to change the focus point while keeping an eye on the subject through the viewfinder when the frame is fixed. It is also useful in after-shooting operations such as cropping 4K PHOTO shots or setting Post Focus.