Panasonic announced the LUMIX DMC-GF2 DSL Micro (DSLM) compact mirrorless camera — their smallest and lightest interchangeable lens system camera — complete with a built-in flash. The LUMIX GF2 is compatible with lenses from the Micro Four Thirds standard, meaning the system is small and compact, while not compromising ease of operation or image quality. Even more, the LUMIX GF2 is compatible with Panasonic's new 3D interchangeable lens, the LUMIX G 12.5mm / F12, so users can take 3D photos.

“Compared to the GF1, its predecessor, the GF2 has been reduced approximately 19% in size and approximately 7% in weight yet is still retains its signature built-in flash.”
— Darin Pepple, Senior Product Manager, Imaging, Panasonic Consumer Electronics Company 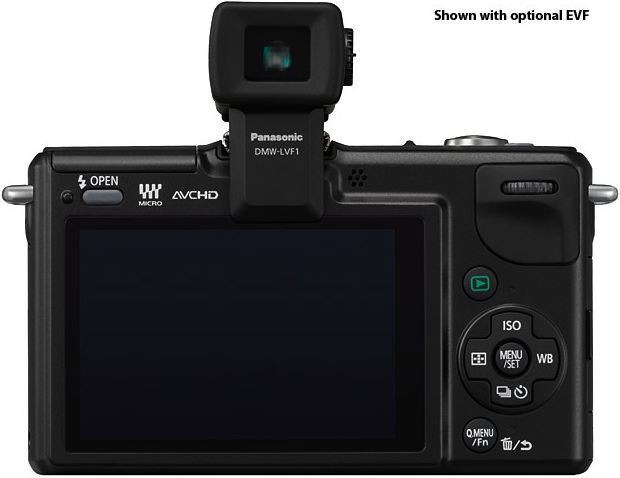 The LUMIX GF2 is extremely easy to operate for consumers at any level, thanks to a newly-designed user interface, which allows for the focus to be set, or shutter released, by simply touching the large 3-inch touch-screen LCD. The touch-screen LCD with a 460,000-dot-resolution makes taking great photos intuitive. Once a user locks on a subject by touch, the LUMIX GF2 tracks the subject with the AF tracking function, even if the subject moves — making it easy to take photos of moving subjects, like children playing. The contrast AF system adopted by the LUMIX DMC-GF2 is not only accurate and easy to use, but also very fast. Users can choose from a wide range of AF (Auto Focus) modes, including multiple-area AF with up to 23 focus areas, 1-area AF with a selectable focus area, Face Detection, and AF Tracking.

The touch operation also dramatically shortens the time spent navigating the menus. With the LUMIX GF2's newly-designed Touch Q-menu, the user can customize the camera's shortcuts with the most commonly used settings. Together with the simple button components, including dedicated buttons for video recording and iA (Intelligent Auto) mode which lights in-use, users can operate the camera intuitively with ease.

While achieving breakthroughs in compactness of design and outstanding photo and video quality, the Panasonic LUMIX GF2 can contribute its professional-level imaging performance to well-balanced engine and sensor technologies. For the image processor, the Venus Engine FHD is incorporated, featuring exceptionally high performance signal processing capabilities in both photo and movie recording. With the advanced noise reduction system employing the 3D NR and CNR (Chromatic Noise Reduction), users can capture clear, naturally-balanced images even when shooting at high ISO sensitivity levels to help prevent the color bleeding. 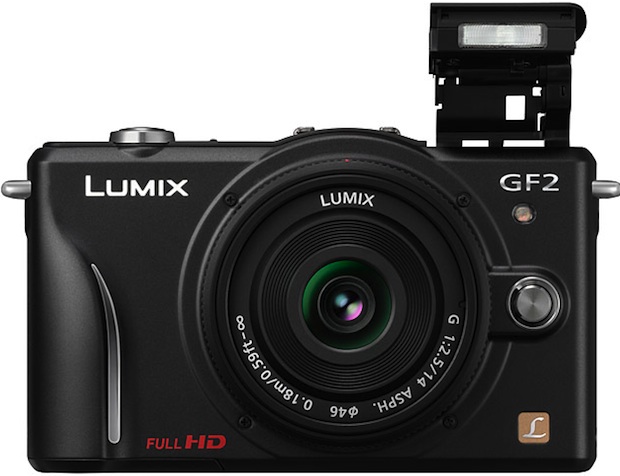 Panasonic's Venus Engine FHD enables Intelligent Resolution technology, which means that three areas — outlines, detailed texture areas and soft gradation — are automatically detected. Then, the outline parts are enhanced effectively to give edges more clearness while giving a moderate accentuation to the texture areas to look more finely detailed. To the soft gradation part, noise reduction system is applied to make it smoother. Apart from the uniform enhancement of sharpness, the innovative technology Intelligent Resolution precisely performs signal processing pixel by pixel, resulting in images that are naturally clear and crisp in both video and photos. The 12.1-megapixel Live MOS sensor featured in the LUMIX GF2 offers the best of both worlds — the superb image quality of a CCD sensor, plus the lower power consumption of a CMOS sensor.

All of Panasonic's LUMIX G-Series DSLM cameras are equipped with the highly-efficient Dust Reduction System. If dust gets inside the camera when the user changes lenses, it could cling to the image sensor and show up as a spot in photos. The Dust Reduction System helps to reduce this risk by placing a supersonic wave filter in front of the Live MOS sensor. Vibrating vertically around 50,000 times per second, the filter repels dust and other particles. 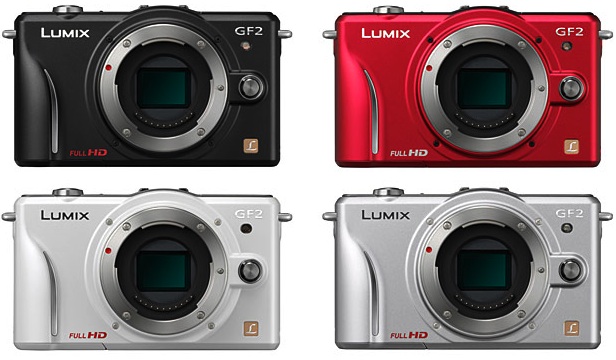 The Panasonic LUMIX GF2 is artistic not only in form, but also in function, as it provides an array of features that lets users capture true-to-life images while also creating their own expressive, beautiful images. The LUMIX GF2 features My Color mode which is integrated with the conventional Film mode. My Color mode offers a total of eight preset effects — Expressive, Retro, Pure, Elegant, Cinema, Monochrome, Dynamic Art, Silhouette, plus Custom mode, which lets users manually set the color, brightness, saturation and contrast levels. Also, with the Full-time Live View function, users can see how these settings will affect the images before they shoot, which makes it easier to capture the exact effect desired. The LUMIX GF2 has 17 Scene modes, most which can be used during video shooting, too. The exposure meter can be displayed in the P/A/S/M shooting modes for entry-level users to visually learn the correlation between shutter speed and aperture to enhance their photography skills.

Availability
The Panasonic LUMIX DMC-GF2, with a quality and solid aluminum body, will be available in black, silver, white, and red models with the following kit options: DMC-GF2C — 14mm F2.5 Lens Kit and DMC-GF2K — 14-42mm Zoom Lens Kit. The LUMIX DMC-GF2 will be available in mid-February 2011 and will come in black, silver, red, and white models. The LUMIX GF2 (body-only) will have a suggested retail price of $499.95. Lens pricing is as follows: