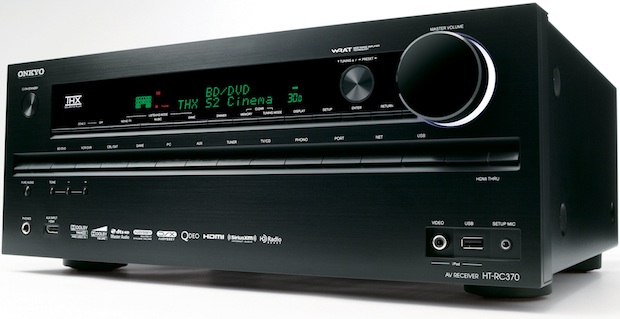 Onkyo announced the HT-RC370 7.2-Channel THX Select2 Plus Certified Network Home Theater Receiver equipped with the new Marvell Qdeo 4K video upscaling processor and Audyssey MultEQ XT audio processing. It includes a front-panel USB port that offers a direct digital connection for an iPod or iPhone, along with support for audio playback from USB mass-storage devices. The USB port even support album art from your iPod/iPhone.

The network-capable receiver supports streaming PC audio and Internet radio from the likes of Pandora, Rhapsody, Napster, SiriusXM Internet Radio, Slacker, Mediafly and vTuner and provide compatibility with Windows 7 and DLNA. The Internet connection greatly simplifies the process of providing future updates to the receiver's firmware. It is compatible with the recently announced UWF-1 Wireless USB Adapter that provides an IEEE 802.11b/g/n connection to access music on a home network. Plus it can take advantage of Onkyo's free Remote App for iPod, iPhone, or iPad to control the A/V receiver.

The HT-RC370 also include connections for USB, Ethernet, and Onkyo's proprietary Universal Port (U-Port), as well as a full array of traditional audio and video sources.

The HT-RC370 is THX Select2 Plus certified. The advanced HDMI interface supports lossless high-definition surround sound via Dolby TrueHD and DTS-HD Master Audio codecs. The HT-RC370's sonic performance has been upgraded with Audyssey MultEQ XT for a superior room equalization setup and the addition of Dolby Volume for optimal sound at any volume setting.

The brand new Marvell Qdeo video-processing chip scales video to 1080p and beyond to as much as 4K of horizontal resolution, regardless of the source resolution. While 4K video display technology is not yet on the market, this new processor handles current-source upsampling with ease, and will be ready for future displays.

Price and Availability
The Onkyo HT-RC370 will be available in April for $849 and replaces the HT-RC270.