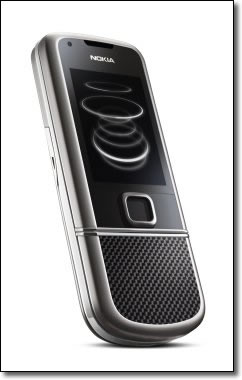 The latest edition of the Nokia 8800 Arte has now been released in the UK on O2 contract deals, the new Carbon Arte 8800 from Nokia offers the same amazing style as the rest of the models in the 8800 Arte range but adds a few extras aswell as being made from expensive materials for that exclusive and chic look.

The Nokia 8800 Arte Carbon mobile phone is the latest in the premium range from Nokia. With an elegant slide-function design which reveals an amazing array of high-tec features. Including a 3.2-Megapixel camera with digital zoom and auto focus multimedia messaging and data transfer via bluetooth or USB.
Two touches on the steel facia wakes the clock up and brings it alive on your screen. ‘Living wallpaper’ allows your wallpaper to come alive by adapting to time battery power and signal strength.
Finally the coolest feature of all the ability to silence a call simply by turning the Nokia 8800 Carbon Arte face-down on a surface.

Be amazed by the craftsmanship and the exclusive materials