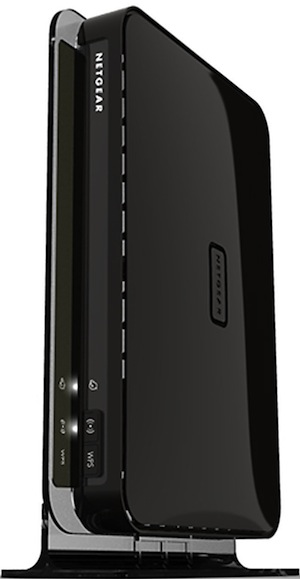 NETGEAR, Inc. today announced the availability of its RangeMax Dual Band Wireless-N Gigabit Router (WNDR3700), a networking device that sets a new bar for the industry in terms of advanced features, speed and range.

Winner of a “Best of Innovations” award at the 2009 Consumer Electronics Show, NETGEAR’s RangeMax Dual Band Wireless-N Gigabit Router is one of the first consumer routers to be compatible with DLNA-certified products. This feature enables media enthusiasts and gamers to easily stream digital content to new DLNA-compliant HDTVs and gaming consoles. Additionally, NETGEAR is pioneering broadband usage metering in a series of its products; the RangeMax Dual Band Wireless-N Gigabit Router is the first to include this feature. This enables consumers to accurately monitor their usage of download traffic in a given time period so they can easily stay within the limits designated by their Internet Service Provider (ISP).

The RangeMax Dual Band Wireless-N Gigabit Router will be a highlight of NETGEAR’s booth at IFA, one of the world’s largest consumer electronics trade shows, taking place September 4-9 in Germany. NETGEAR’s booth will be located in Hall 15.1/116 of the Messe Berlin Exhibition Grounds.

“Today’s wireless networks are simultaneously supporting multiple bandwidth-hungry applications — online gaming in the kids’ rooms, high-definition video streaming in the family room, and file sharing and Voice over IP across the home or business. As a result, it’s become imperative for wireless networks to have features that enhance the overall consumer experience while delivering the fastest speed, highest reliability and maximum range that today’s applications demand,” stated Som Pal Choudhury, NETGEAR’s senior product line manager for advanced wireless products. “Therefore, we’re thrilled to offer our home and small business customers the power and flexibility of such a full-featured router, packed with state-of-the-art technology. It’s the ultimate networking machine.”

ReadyDLNA
With integrated DLNA functionality, the NETGEAR router acts as a Universal Plug and Play (UPnP) media server and automatically discovers media files on the USB hard drive. The media content stored on the USB hard drive connected to the router can be easily viewed and played by the NETGEAR Digital Entertainer Elite (EVA9150) as well as DLNA-enabled televisions and set-top boxes, such as XBox 360 and PlayStation 3.

Enterprise-class Security
The router incorporates enterprise-class wireless security with Wi-Fi Protected Access (WPA-Enterprise and WPA2-Enterprise) encryption that keeps data secured for businesses, and Push ‘N’ Connect that helps users connect easily and securely with the press of a button. Additional Wi-Fi networks can also be created for visitors to the home or office with restricted access to the local network.

Broadband Usage Meter
With the integrated broadband usage meter, users can not only view daily, weekly and monthly usage statistics on download traffic, but also get customized notifications when they are close to the monthly limit designated by their ISP.

Green Features
Three adjustable power and range settings on the router can reduce wireless transmit power by up to 75 percent compared to when the router is transmitting at full power. The auto-sensing gigabit Green switch automatically adjusts power consumption based on cable length and unused ports. Also, when Wi-Fi is not in use, turning these ports off via the dedicated wireless on/off switch reduces power by up to 30 percent.

“Many ISPs are beginning to set and lower limits for how much their subscribers are allowed to download each month, not to mention charging for overages. Therefore, it’s becoming increasingly important for people to be aware of how much total bandwidth they are consuming — not only on their PCs, but also on connected devices like iPhones and gaming consoles,” said Joyce Putscher, principal analyst from In-Stat, a market research firm. “It makes good business sense to offer routers that not only facilitate the seamless streaming of data across the network, but also enable measuring of Internet bandwidth usage so consumers can more easily stay within acceptable limits.”