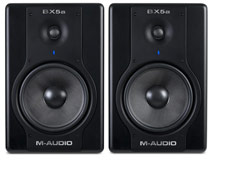 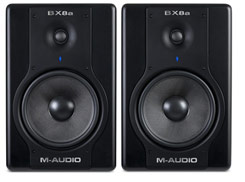 The BX5a Deluxe monitors provide 70 watts of bi-amplified power, while the BX8a Deluxe monitors deliver 130 watts. The speaker designs also feature finely tuned crossovers and system electronics to ensure that both the high- and low-frequency drivers are asked to deliver the frequencies they are most effective at reproducing. This enables the systems to retain a smooth spectral balance. Magnetic shielding allows users to set up the monitors near other electronic equipment without fear of interference. The systems also have a power indicator and volume control.

“The combination of accurate sound and premium components propelled the original Studiophile BX and BXa series monitors to quickly become best-sellers,” said Adam Castillo, marketing director at M-Audio. “Now the BX5a Deluxe and BX8a Deluxe systems deliver a new performance standard for compact and mid-sized reference monitors. The BX8a Deluxe delivers clear highs that don’t fatigue the ears, an integrated and well-defined mid range, and as much bass as many 2.1 systems. The BX5a Deluxe provides rich, detailed sound across the entire frequency spectrum, including defined bass that belies the monitor’s small footprint.”

The Studiophile BX5a and BX8a Deluxe monitors are currently expected to ship in the first quarter of 2008 at MSRPs of USD $399.95 and $599.95 per pair, respectively.

M-Audio Studiophile Monitors
The initial release of the M-Audio Studiophile series defined a new price point for professional-quality reference monitors, and the BX5 monitors quickly became bestsellers. The Studiophile BX5a and BX8a upped the ante with Kevlar drivers, silk high-frequency drivers and other enhancements — and continued to outsell other monitors in their class. The BX Series Deluxe monitors improve upon this success with a variety of sonic and aesthetic enhancements.