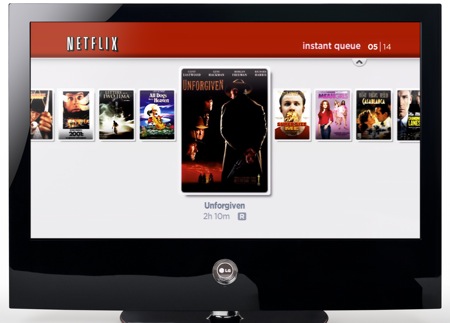 Available this spring, the new LCD and plasma HDTVs will join the LG BD300 Network Blu-ray Disc Player, the first Blu-ray disc player to stream movies instantly from Netflix. These products – and five new models of Blu-ray Disc players and home theater systems planned for 2009 – will offer consumers a variety of ways to enjoy more than 12,000 choices of movies and TV episodes instantly from Netflix. Netflix members owning one or more of the devices pay as little as $8.99 per month for unlimited instant streaming and unlimited DVDs from a catalog of more than 100,000 DVD titles in more than 200 genres.

“Embedding the Netflix streaming software in the television is a natural progression of our partnership with Netflix and our innovative product line,” said LG Electronics USA President Teddy Hwang. “This is an LG industry-first, which provides another flexible option for consumers seeking to access exciting content directly through their HDTV.”

“LG Electronics was first to embrace Netflix as a streaming partner a year ago, and was first in 2008 to introduce a Blu-ray disc player that streams movies from Netflix,” said Netflix CEO Reed Hastings. “So it’s fitting that LG is the first to introduce Netflix instant streaming directly to the TV with these next-generation HDTVs.”

Netflix began offering its instant streaming functionality on the PC in January 2007 and made the leap to the TV last year via Netflix ready devices such as the LG BD300 Blu-ray disc player. With today’s announcement, Netflix will be streaming, for the first time, directly to the TV with no external device required.

Instantly streaming content from Netflix to the LG HDTVs will rely on a broadband connection and Queue-based user interface. Netflix members will use the Netflix Web site to add movies and TV episodes to their individual instant Queues. Those choices will automatically be displayed on members’ TVs and available to watch instantly through the HDTV. Once selected, movies will begin playing in as little as 30 seconds. With the accompanying remote control, Netflix members will be able to browse and make selections right on the TV screen and also have the ability to read synopses and rate movies. In addition, they will have the option of fast-forwarding and rewinding the video stream.

“The partnership between Netflix and LG Electronics continues to give consumers more and better options for home entertainment,” said Hastings.

About Netflix, Inc.
Netflix, Inc. (NASDAQ: NFLX) is the world’s largest online movie rental service, with more than eight million subscribers. For one low monthly price, Netflix members can get DVDs delivered to their homes and can instantly watch movies and TV episodes streamed to their TVs and PCs, all in unlimited amounts. Members can choose from over 100,000 DVD titles and a growing library of more than 12,000 choices that can be watched instantly. There are never any due dates or late fees. DVDs are delivered free to members by first class mail, with a postage-paid return envelope, from over 100 U.S. shipping points. More than 95 percent of Netflix members live in areas that generally receive shipments in one business day. Netflix is also partnering with leading consumer electronics companies to offer a range of devices that can instantly stream movies and TV episodes to members’ TVs from Netflix. For more information, visit http://www.netflix.com.