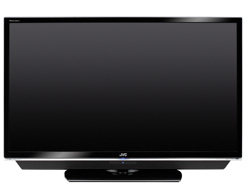 At the heart of the new JVC HD engine is the company’s new Genessa 32-bit processor – sixth generation technology and now with significantly higher processing capacity. The results are accurate, vividly colored images and superb motion image quality – critical performance parameters under any conditions, but especially so with high-resolution large-screen displays.

The sound package for the Procision LCDs includes a power output of 10 watts per channel, twin oblique cone speakers and JVC’s Max Audio sound technology for rich sound with the feel of powerful bass reproduction.