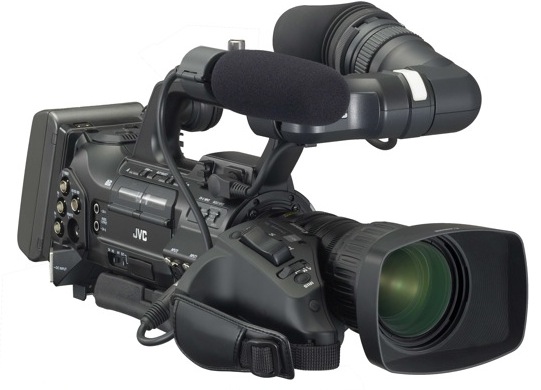 “Our new generation of ProHD products brings together the most highly regarded and proven technologies in the industry, providing unmatched ownership and operational experience,” says Craig Yanagi, JVC’s national marketing manager for Creation Products. “With the GY-HM700, JVC has changed the dynamics of professional video production. Its ergonomic design and video quality meets or exceeds the performance requirements of the most demanding broadcast, ENG and cinematography applications. Combined with fastest shoot-to-edit workflow in the industry, utilizing low-cost solid-state media, ProHD provides an unprecedented level of efficiency and economy for today’s professional videographer.”

Industry’s first native support QuickTime file format for Apple’s Final Cut Pro
The GY-HM700 natively records the QuickTime file format used by Apple for Final Cut Pro. There is no need to convert or rewrap files prior to editing. Post-production can begin immediately after shooting. It is even possible to edit directly from the memory card. Since no transfer or re-encoding takes place, first generation quality is always maintained.

The GY-HM700 is the industry’s first shoulder supported camcorder to store files on inexpensive SDHC memory cards. The camera provides 2 memory card slots, for a total of up to 64GB of on-board storage–enough for more than 6 hours* of continuous HD recording. The camera automatically begins recording on the second card when the first card fills up. When the second card fills up, the camera reverts to recording to the first card slot, allowing for virtually unlimited recording lengths.

SDHC cards are economical, highly reliable, and make possible a recording system that consumes up to 20% less power than tape or HDD based systems. The per-minute cost of SDHC memory is comparable to video tape. Moreover, SDHC media is the first practical solid state solution to physical archive.

By attaching the optional KA-MR100 dockable media recorder, it is possible to record Sony XDCAM EX compatible .MP4 files onto high-speed SxS memory cards, while at the same time recording the same .MP4 files to inexpensive SDHC cards. Having two copies instantaneously available provides more versatility in the field with the assurance of always having a back-up.

Weighing in at a mere 8 lbs. including lens, viewfinder, microphone and battery, the GY-HM700 can rest comfortably on the right shoulder to provide stable, steady shots, without causing the fatigue associated with bulkier cameras.

The GY-HM700 records two channels of uncompressed LPCM 16 bit audio at 48Khz. Levels can be controlled manually, or automatically using AGC, and an audio meter is provided in the LCD and viewfinder displays for easy adjustment. Balanced XLR inputs with phantom power are provided on the camera for an external microphone and/or wireless receiver, and a shotgun microphone is provided.