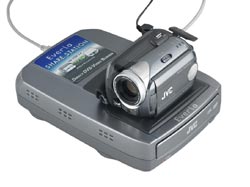 Owners of select new JVC Everio hard drive camcorders will be able to create DVDs without the need for a PC with the introduction of JVC’s new Everio SHARE STATION, a DVD burner designed specifically for use with three new JVC Everio G-Series camcorders.

The availability of the new JVC Everio CU-VD10 gives users of the company’s Everio hard drive camcorders the best of both worlds — the capacity and convenience of hard drive video recording combined with quick, simple transfer to a DVD.

“Now, consumers can enjoy the benefits of hard drive recording — hours and hours of video capacity, direct access to scenes, easy re-sequencing of scenes, and instant scene deletion — and a quick and easy way to put their footage onto a DVD,” said Dave Owen, General Manager, Consumer Video Division, JVC Company of America.

The new JVC Everio SHARE STATION, available for about $200, connects via a USB cable to the new Everio GZ-MG27, GZ-MG37 and GZ-MG77 and allows the camcorder to transfer footage directly to a DVD. These new Everio camcorders convert .mod files to DVD Video format, which the SHARE STATION then makes into DVD Video discs that can be played on most DVD players.

Once connected via USB 2.0, the camcorder automatically identifies the DVD burner and is used to control the burning process. The desired video clips are selected from a menu that appears on the camcorder’s LCD, and with the push of a button they’re transferred to a blank DVD that had been loaded into the JVC burner. One hour of video footage, which is about 4GB, takes approximately 45 minutes to burn to a disc. Recordings are made using DVD-R/-RW discs.

The Everio SHARE STATION can also be connected to a PC (Windows XP/2000SP4) for DVD burning and reading. Used with recommended DVD-R/-RW discs it offers a write speed of up to 8x (4x RW), and a read speed of 8X (5x RW). It offers a reading speed of 5x for DVD-ROM, and 10x for CD-R, CD-RW, and CD-ROM discs. The burner comes with Power 2 Go data writing software from Cyberlink for PC. Everio camcorders come with Cyberlink’s PowerDirector Express NE for PC editing, PowerProducer 3 NE for PC authoring and PowerDVD 5 NE for PC playback.

Pricing and availability
The JVC CU-VD10 Everio SHARE STATION will be available as of April and will sell for about $200.