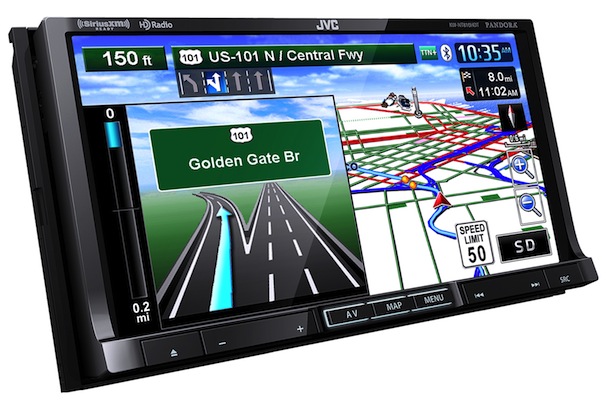 For 2013, JVC announced three in-dash car navigation receivers which support both Android and iPhone integration via Bluetooth serial port profile (SPP) for Pandora and iHeartRadio apps (spring 2013). The new KW-NT310 and KW-NT510HDT offer a 6.1-inch touchscreen, and the KW-NT810HDT (pictured above) has a 7-inch motorized touchscreen. The HD Radio network has been enhanced with the industry’s first digital Active Alerts, which allows drivers to receive real-time weather advisories directly on the navigation system’s display. All three new models are SiriusXM-Ready and are capable of receiving SiriusXM’s expanded commercial-free music, sports and comedy channel lineup as well as SiriusXM Latino, a suite of Spanish-language programming.

HD Radio Active Alerts (KW-NT510HDT, KW-NT810HDT)
JVC has taken the HD Radio package with iHeartRadio music streaming services and added Active Alerts, an industry first. The Active Alerts feature displays federal government alert service in text form on the navigation screen to alert drivers the instant an emergency or severe weather alert is issued and help keep them informed wherever they are. Total Traffic Network also provides real-time traffic updates, sports, entertainment, weather and news information on-screen with a free lifetime subscription on compatible in-dash receivers. Both the KW-NT510HDT and the KW-NT810HDT will come standard with two HD Radio tuners: One for Total Traffic Network with HD Radio™ and Active Alerts and the other for audio station tuning.

SiriusXM Ready (KW-NT310, KW-NT510HDT, KW-NT810HDT)
Additionally, all three new models are SiriusXM-Ready and offer the capability of receiving SiriusXM’s commercial-free music, premier sports talk and live events, comedy, news and exclusive talk and entertainment, and SiriusXM Latino, the most comprehensive Latin music, sports and talk programming in radio. SiriusXM programming is received through the SXV200 SiriusXM Connect Vehicle Tuner Kit (sold separately, SiriusXM subscription required). The SXV200 is a compact solution that can be mounted behind the dashboard and connects directly to the receiver using one simple cable. It is also plug and play – there are no translators or tuner programming required.

iHeartRadio (KW-NT310, KW-NT510HDT, KW-NT810HDT)
New receiver models will have wireless access to the iHeartRadio app on Android smart phones through a Bluetooth serial port profile (SPP) along with iPhone and iPod users via USB connection. The KW-NT310, KW-NT510HDT and the KW-NT810HDT units, along with access to more than 1,500 live radio stations, will allow iHeartRadio users the ability to create custom stations inspired by a song users are listening to, save favorite stations for easy future listening and access stations saved from other devices via “My Stations.” These new receivers will also allow iHeartRadio listeners to utilize the app’s social sharing functions and thumb-up or thumb-down songs on custom stations.  This app can be easily accessed on the mobile device as well as on the head unit and will be available for download in Spring 2013 from the respective cell phone manufacturers’ app stores.

NaviBridge  (KW-NT310, KW-NT510HDT, KW-NT810HDT)
All new three navigation units will work with the NaviBridge app for iPhone® using a USB connection and Android phones with a Bluetooth connection. This free app lets users search for points of interest then transfers the GPS coordinates to the head unit to use for turn-by-turn navigation. New for 2013, the application is now designed to work with Android phones, which previously only worked with iPhones. NaviBridge will also work with popular social-networking sites to locate points of interest such as Localscope, Around Me and others. 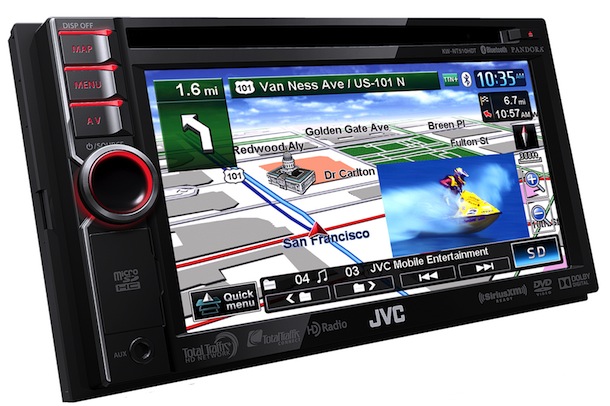 The KW-NT310 will offer control of iHeartRadio now including its custom station and “My Stations” features, Android Bluetooth connectivity and NaviBridge capability for 2013. In addition, this DVD/CD/USB/SD Navigation receiver with a 6.1-inch touch panel features Bluetooth wireless technology, and map features such as: Junction View, Off-Axis View, 3D Viewing with 3-D Footprint, 360 degree rotation and built-in color 3D landmark icons in most major cities. In addition the unit offers voice guidance with turn-by-turn voice commands. The unit offers a 1A current capable rear USB port with drive change mode and over 30,000 variable-color illumination choices. 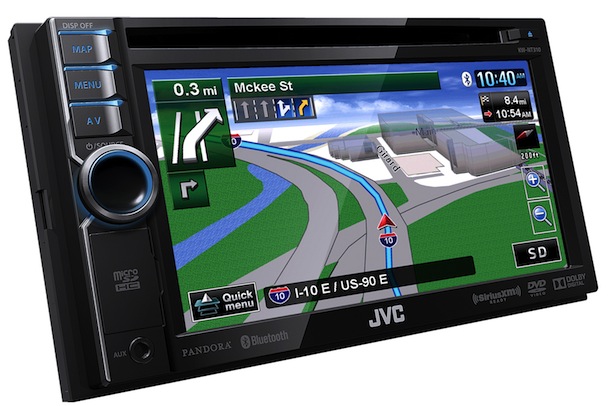 The KW-NT810HDT Navigation unit carries the same common features of these models with a 7-inch motorized faceplate and has built-in HD Radio audio and data tuners as well as the HD Radio Active Alerts feature. Also included is a free lifetime subscription to Clear Channel Radio’s Total Traffic HD+/Total Traffic Connect for on-screen news, sports, weather, and real-time traffic updates. Bookmark and Channel Guide, two additional HD Radio Technology enabled features are also included. The navigation head unit has been upgraded for 2013 to include iHeartRadio and its custom stations and “My Stations” features, Android connectivity with Bluetooth and NaviBridge capability.