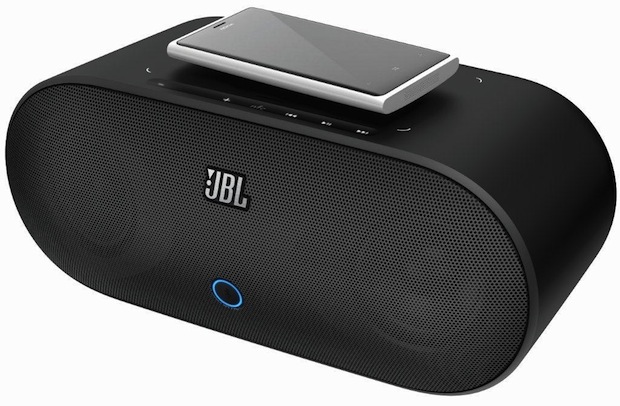 JBL announced two wireless speaker and charging docks designed for Nokia Lumia 920 and 820 smartphones. The devices feature NFC (near-field communication) chips, high-quality Bluetooth streaming and full-range drivers for vibrant audio playback from Internet music channels or a personal music collection through these powerful, compact speakers. The JBL PowerUp wireless charging speaker for Nokia wirelessly charges any Qi-compatible device, while streaming audio via Bluetooth technology. Simply place the phone with wireless charging shell atop the speaker, and rock out while you power up.

The PowerUp and PlayUp include integrated NFC chips so users with NFC-compatible smartphones, tablets or music players can stream audio content simply by tapping the gadget on the speakers. No complicated setup or menus are needed. Both speakers are optimized with aptX audio so Bluetooth streaming is robust and clear, and stereo mini-jacks are included so any device with a 3.5mm connector – including laptops, desktop PCs and MP3 players – can enjoy the crisp sound from either speaker.

The JBL PowerUp wireless charging speaker for Nokia features a proximity sensor that illuminates the controls when it detects an NFC-compatible device nearby, and an LED light outlines the Qi-compatible wireless charging surface for proper phone placement; the light pulsates to indicate when the phone is charging. The PowerUp features two full-range drivers that provide deep, accurate bass and 65Hz – 20kHz frequency response. A Bluetooth pairing button and LED indicator allow for easy control and connection status. The PowerUp will be offered in cyan, black and white. 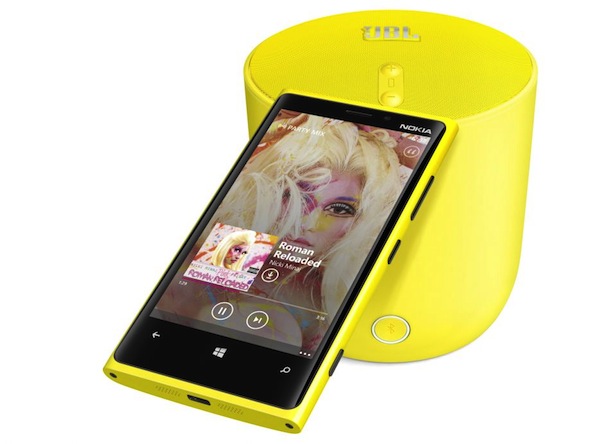 The JBL PlayUp portable wireless speaker for Nokia is an ultra-portable, acoustically sophisticated speaker that delivers a 360-degree soundstage featuring three drivers. The PlayUp delivers deep, accurate bass with an impressive frequency range of 85Hz – 22kHz. The PlayUp has a rechargeable battery life of 10 hours, allowing users to take the speaker with them anywhere – the beach, a party or the office – without the need to charge. The speaker features Bluetooth wireless connectivity and includes an NFC chip, so it starts to play when a new Lumia phone or other NFC-enabled device is nearby. The JBL PlayUp is available in cyan, white, black and yellow. It features a replaceable battery, and its accessories include a carrying pouch, a micro USB charger and a 3.5mm audio cable.

Harman Announces Radiance 2400 Wireless Speakers for the home and JBL Flip 6 Bluetooth Speaker for on the go. Check out the details.