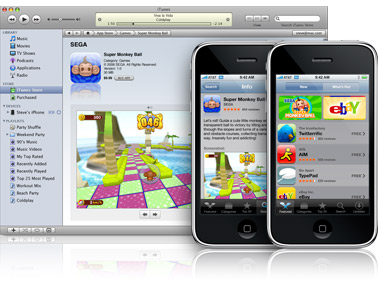 Apple today announced that iPhone™ and iPod touch users have already downloaded more than 10 million applications from its groundbreaking new App Store since its launch late last week. Developers have created a wide array of innovative mobile applications ranging from games to location-based social networking to medical applications to enterprise productivity tools. Users can wirelessly download applications directly onto their iPhone or iPod touch* and start using them immediately. More than 800 native applications are now available on the App Store, with more than 200 offered for free and more than 90 percent priced at less than $10.

“The App Store is a grand slam, with a staggering 10 million applications downloaded in just three days,” said Steve Jobs, Apple’s CEO. “Developers have created some extraordinary applications, and the App Store can wirelessly deliver them to every iPhone and iPod touch user instantly.”

The App Store on iPhone works over cellular networks and Wi-Fi, which means it is accessible from just about anywhere, so users can purchase and download applications wirelessly and start using them instantly. Applications are free or charged to the user’s iTunes account and the App Store notifies the user when updates are available for their apps. The App Store is also available in iTunes (http://www.itunes.com) running on a Mac or PC, which syncs applications to the iPhone or iPod touch using a USB cable.