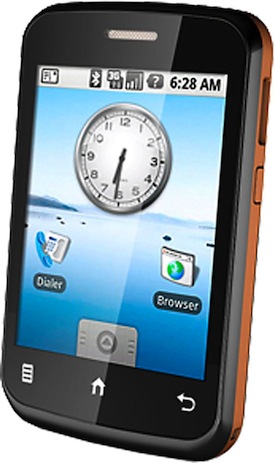 The Innocomm Shark, which features a 3.2 inch WVGA (800×480) display, capacitive touchscreen, 8 megapixel autofocus camera, 3.5G connectivity, Wi-Fi and analog TV, is designed to address the growing interest in feature-rich touchscreen smartphones while entering the category at a price significantly lower than current comparable models. According to Gartner Dataquest, the smartphone market is expected to grow by nearly 50% in 2010 and 2011, outperforming basic handset growth over the next five years.

Innocomm is among a growing number of mobile device developers to build in Telegent’s free-to-air mobile TV technology as a competitive differentiator. The Shark’s analog TV feature provides consumers with mobile access to the same free-to-air television programming that they view on conventional TV sets, delivering ready access to news, sports and other preferred programming while on the go. The handset’s large, high quality display combined with touchscreen controls allows for a high quality viewing experience. The model also incorporates the ability to record TV clips to a microSD card. Innocomm plans to add digital TV capability to future models.

“We expect the phone’s price and feature profile to appeal to operators seeking to add 3.5G Android smartphones to their portfolio and to leverage 3G as a strategic growth platform,” said Paul Wang, President at Innocomm. “The combination of analog TV with Android’s feature-rich platform allows us to deliver both operator and consumer extraordinary value in markets in Asia, Latin America and parts of Europe.”

About Telegent Systems, Inc.
Telegent Systems is a fabless semiconductor company that enables the reception of live, free-to-air analog and digital broadcast television in mobile handsets and other portable consumer devices. Telegent’s television-on-a-chip solutions solve the long-standing technical challenges that have precluded mobile reception of analog broadcast TV, enabling manufacturers and operators to benefit from the convergence of broadcast TV with mobile and portable devices. Telegent’s products are the most widely sold broadcast television solutions for mobile handsets in the world.

About Innocomm Mobile Technology Corporation
Innocomm is headquartered in the Science Based Industrial Park in HsinChu, Taiwan. Innocomm has more than 450 combined years of experience in mobile phone development for Tier-1 brands such as Nokia, Sony Ericsson and LG. The company strives to be the leading broadband wireless provider in terms of quality, performance and time-to-market. Current products include both Android 3.5G mobile phones and high speed 3.5G modem embedded modules.