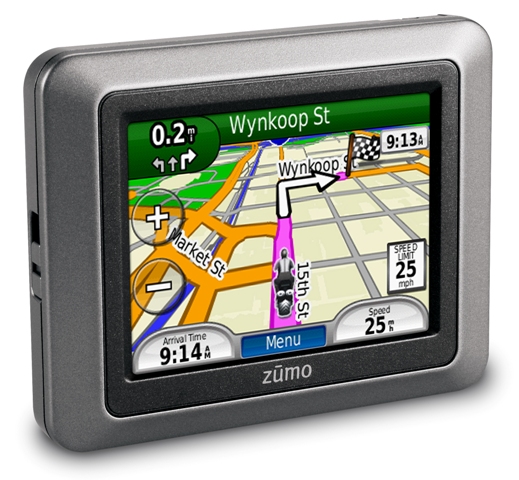 “zumo 220 streamlines the design — and the price –while keeping the most popular motorcycle-specific features at your fingertips,” said Dan Bartel, Garmin’s vice president of worldwide sales. “Compact and waterproof, zumo 220 makes two-wheel navigation as stress-free as possible for riders on any budget.”

Whether you’re riding under a blazing sun or a tranquil moon, you’ll benefit from years of hands-on experience and countless miles of motorcycle expertise of Garmin’s zumo team. With a 3.5″ color touchscreen that’s both rugged and responsive, zumo 220 provides the information you need at a glance in an easy-to-read format as you travel down the road. zumo 220 displays speed limits on most major roads and articulates turn-by-turn directions through spoken street names, such as “turn right on Main Street,” via the built-in speaker or through a compatible Bluetooth helmet or headset. Built to withstand the demands of the open road, zumo 220 is waterproof, glove-friendly and resistant to fuel spray that can wear away at similar devices.

For spontaneous road trips or detailed route planning, zumo 220 makes life easier with preloaded street-level maps of the United States, Canada and Puerto Rico and more than six million points of interest including gas stations, lodging, restaurants and other locations.

Complex interchanges come into focus through advanced routing capabilities such as lane assist with arrows that indicate the proper lane for efficient navigation. And zumo 220 features HotFix™, which automatically calculates and stores critical satellite information and can use that information to quickly calculate a position.

While riding, it’s also easy to access trip information directly from the zumo’s motorcycle console page such as speed, heading, altitude, and a customizable fuel gauge that can be modified to the motorcycle’s maximum fuel range. In addition, with the zumo’s powerful trip planning tools, zumo owners can create and customize routes via computer and then transfer the saved route directly to the zumo before they begin their journey.

Expected by March 2010 for $599.99 MSRP packaged with a motorcycle mount and an automotive mount for an easy transition between bike and car or truck.