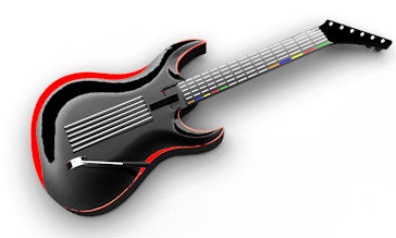 GAMBRIDGE founders Harvey Starr and Stan Gafner today announced the formation of the company and their plans to launch the Z-Line of hybrid digital musical instruments and game controllers. The Company’s initial product, the Z-1, is a game controller and digital guitar which is revolutionizing the world of music video games and music education. Gamers, whether beginners or experts, can now control guitar video games in a more realistic and fun way. The Z-1 also enables the player to learn guitar playing techniques while playing video games or by using a variety of guitar learning software. Mr. Gafner said, “The Z-1 is an awesome standalone guitar that bridges the gap between real guitars and music video game controllers.”

The patented technology used in the Z-Line of hybrid game controller/musical instruments was developed by inventor and musician Harvey Starr, founder of Starr Labs Inc., the leader in professional, hand-crafted MIDI guitars. From the foundations laid by Starr Labs, GAMBRIDGE brings music to everyone, crossing the chasm and bridging the gap by delivering the best platform for both gaming and playing music!