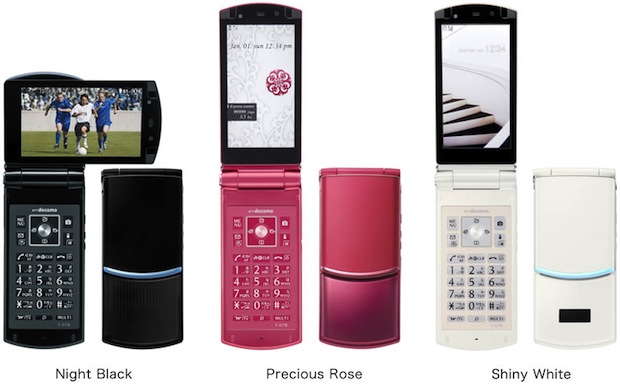 Fujitsu today announced that its new docomo STYLE series F-07B mobile phone will be available from NTT DOCOMO, Inc. in Japan beginning May 21, 2010. Slimmer than previous models, the F-07B is a 14.8mm-thin, horizontally rotating mobile phone with a one-touch open button.

In November 2006, Fujitsu introduced the F903i, featuring a sliding screen that can be rotated horizontally, as a mobile phone ideal for viewing wide-screen content without taking away from the user-friendliness that Fujitsu mobile phone users are accustomed to. Up until now, Fujitsu’s rotating mobile phones have received overwhelming support from users, and based on research by Fujitsu, approximately 70% of all users are interested in a model with a horizontally rotating screen when purchasing their next phone.

In an effort to meet users’ expectations, Fujitsu has designed the F-07B as a cutting-edge 14.8mm-thin, horizontally rotating mobile phone–the world’s thinnest horizontally rotating phone to date1–featuring a one-touch open button and a round case design that fits comfortably in the user’s hand.

In addition, the phone is loaded with a plethora of features, such as a highly sensitive 12.2 megapixel camera–equivalent to ISO 25600–as well as a “location radar” and other advanced human-sensing functions. An expanded array of e-mail communications features including e-mail scheduling and automatic reply have also become available.

The new model is not only perfect as an upgraded version of the rotating mobile phone, but it also meets the needs of users who value functionality and design.