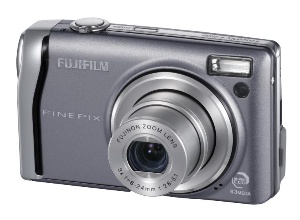 A compact, 8-MegaPixel digital camera with Face Detection Technology, two entry-level models with Fujifilm’s famed Super CCD sensor and consumer storage solutions highlight the announcements made today by FUJIFILM U.S.A, Inc. Fujifilm will be showcasing the cameras – the 8-MegaPixel FinePix F40fd with Fujifilm’s Face Detection Technology, and the 8-MegaPixel FinePix A800 and 6-MegaPixel A610 in meeting rooms N115 and N116 in the Central Hall of the Las Vegas Convention Center throughout the show.

Combining unequalled performance and ease of use, the FinePix F40fd is a compact, highly portable and stylish digital camera. It’s packed with features that make it easy for new photographers to get great pictures, and experienced digital camera buffs will love the advanced photographic capabilities that result in exceptional performance. These include Face Detection Technology by Fujifilm, a hardware based system using Fujifilm’s proprietary dedicated LSI chip, which can detect up to 10 human faces in a scene in as little as 5/100’s of a second, and Dual Shot Mode, a convenient function that takes two shots in rapid succession, one with flash and one without, letting the user decide on the best picture.

Life doesn’t give too many second chances, and a group photo can be tough to capture. Now, the FinePix F40fd features Face Detection Technology by Fujifilm that makes it easy. It sets the correct focus and exposure automatically, regardless of where subjects are located within the frame. Face Detection Technology can even perform flawlessly in difficult focusing and lighting conditions, such as off-center subject faces, low light situations, and even backlit conditions. Fujifilm’s Face Detection Technology also enhances playback functions with the ability to zoom in on each detected face automatically. Now users can check to make sure everyone’s eyes were open and they’re smiling, crop images for the perfect portrait and perform a variety of other functions to make sharing more fun.

Frequently, pictures taken in evening environments, birthday parties or any dim-lit situation can create problems for some digital cameras. The FinePix F40fd allows users to effortlessly capture the moment as their eye sees it, with tremendous clarity and low noise, using Fujifilm’s Real Photo technology. Thanks to the 6th generation FinePix Super CCD-HR chip and the RP processor, the FinePix F40fd can utilize ISO settings of up to 2000, capturing stunning images even in low light while preserving the natural color and clarity of the shot.

To make it easy for consumers to achieve blur-free results, the FinePix F40fd also features Fujifilm’s “Picture Stabilization” mode. Not only does Picture Stabilization reduce the “blur” effect from the photographer’s hand-shake, it also adjusts for subject movement, and compensates for low light shooting, making it a comprehensive solution to prevent blurry photos. This easy-to-identify, automatic setting lets the FinePix F40fd choose the correct light sensitivity and shutter speed for the highest quality digital pictures, with sharp, clean and clear results.

At times using a flash may be necessary to help secure adequate lighting and image quality. This is when the FinePix F40fd’s Intelligent-Flash system, or “i-Flash” comes into play. i-Flash detects subtle lighting differences within a scene, and then varies the flash intensity accordingly. It also leverages the high sensitivity of FinePix cameras to enable the camera to use less flash, preventing that “blasted with light” effect that so many digital camera flashes leave you with. The result is pleasing, natural tones with no flash “wash-out”. 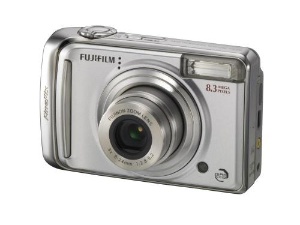 Fujifilm’s A-Series digital cameras are among its most popular models and the 6-MegaPixel FinePix A610 should help continue this trend. This camera has the same comfortable design as the FinePix A800 and is priced right for the first-time digital buyer.

The FinePix F40fd, A800 and A610 will feature an xD-Picture Card / SD Media Card compatible slot.

On display at CES will be Fujifilm’s full line of DVD and CD products, as well as samples of Fujifilm’s high capacity Blu-ray and HD DVD disc media. Fujifilm will also have on display a new disc labeling system announced in Japan and Europe called “LabelFlash,” which utilizes enhanced firmware and the existing DVD recording laser to “etch” an image into specially formulated Fujifilm dye on the “label side” of a standard blank disc. This process eliminates the need for special disc printers or sticky labels for archived DVD content.

Additionally, Rich Gadomski, VP of Marketing for Recording Media at Fujifilm will sit on a Fujifilm sponsored roundtable at Storage Visions 2007 (concurrent with CES) moderated by Lee Gomes of The Wall Street Journal, “Digital Storage for the Content Value Chain: What sort of Business is this?” This high level executive panel will feature industry leaders discussing digital storage challenges and opportunities for creation, distribution and reception of entertainment and personal content. The session will take place at the Flamingo Hotel, Room B2 at 9:30 AM on January 7, 2006.

Fujifilm brings continuous innovation and leading-edge products to a broad spectrum of industries including medical, life sciences, consumer electronic, chemical, graphic arts, information systems, photography and office products based on its vast portfolio of digital, optical, fine chemical and thin film coating technologies. The company provides products and services that contribute to the advancement of culture, science, technology and industry, as well as to improved health and environmental protection. It is the global leader in digital minilabs; Computed Radiography systems; ink dyes, pigments and UV inks for inkjet printers and materials used in the production of flat panel displays. It was ranked number 18 for U.S. patents granted in 2005, employs more than 75,000 people worldwide and in the year ended March 31, 2006, had global revenues of $22.8 billion.