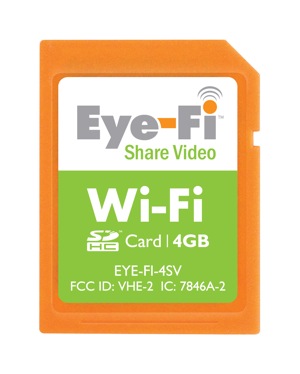 Eye-Fi Inc., makers of the world’s first wireless memory card for digital cameras, today announced the release of two new wireless SD memory cards that will upload videos directly from a digital camera to a computer and the Web. Videos are growing in popularity, and more than 144 million videos were viewed online in 2008, according to comScore. In addition to automatic photo uploads, the next generation Eye-Fi cards effortlessly deliver their video clips to YouTube or Flickr.

“The magic of Eye-Fi’s new cards is that they work with the camera you already own to capture photos – and now videos – and send them directly to the Web for sharing,” said Jef Holove, CEO for Eye-Fi. “Whether you’re spending time with your kids or chatting with a friend, your memories will upload in the background for instant sharing – all by simply turning on your camera.” 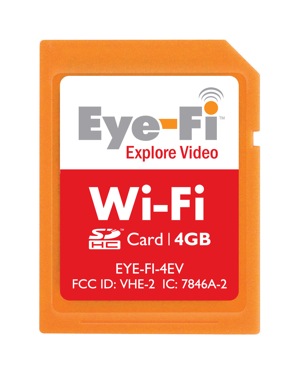 The 4GB Eye-Fi Share Video and Eye-Fi Explore Video cards can upload photos and videos directly to one of more than 25 online photo sharing and social networking sites. The Eye-Fi Explore Video card automatically geotags photos and videos with location information about where the image was captured, and offers hotspot access at more than 10,000 Wi-Fi locations for photo and video uploads away from home.

“According to our research, nearly half of consumers reach for their digital camera to take video, instead of their other video capture devices, like phones or camcorders,” said Alan Bullock, research analyst with InfoTrends. “Solutions like Eye-Fi make it easy for consumers to use the digital camera they already own to shoot and share videos.”

Next Generation of Wireless Memory Cards Feature More Capacity, Lower Prices
The next generation Eye-Fi cards are available for pre-order at www.eye.fi for an MSRP of $79 (4GB Eye-Fi Share Video) and $99 (4GB Eye-Fi Explore Video). The cards will be available in stores later this month.

Eye-Fi’s current line-up of photo memory cards are now available at new prices – $49 for the 2GB Eye-Fi Home and $59 for the 2GB Eye-Fi Share, both which upload photos only. All cards can be purchased at Apple Retail Stores and Best Buy locations nationwide, and at major online retailers such as Amazon.com, Walmart.com and Costco.com.

Eye-Fi Announces New iPhone Application
Tomorrow, Eye-Fi will release a new iPhone application that allows Eye-Fi users to store and share all their photos, from both iPhone and a digital camera, into the same organized computer folder and to one of 25 online photo sharing Web sites. iPhone users who own an Eye-Fi card can download the free application from Apple’s App Store.

Eye-Fi cards have won numerous product awards, including Good Housekeeping’s V.I.P. award in 2009 and “Last Gadget Standing” at the 2009 Consumer Electronics Show in Las Vegas for the second year in a row.

About Eye-Fi
Founded in 2005, the company is dedicated to building products and services that help consumers navigate, nurture and share their visual memories. Eye-Fi’s patent-pending technology works with Wi-Fi networks to automatically send photos and videos from a digital camera to online, in-home and retail destinations. Headquartered in Mountain View, Calif., the company’s investors include LMS Capital, Opus Capital, Shasta Ventures and TransLink Capital.