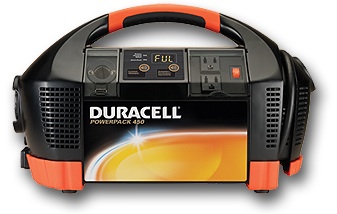 When an emergency strikes, nothing is more welcoming than a calm voice and a reliable power supply. Duracell is providing a bit of both with the introduction of Duracell Powerpack 450 with Voice. It’s a solution that consumers need, according to a recent survey that shows the majority of Americans are not equipped for power emergencies either at home or on the road.

“The Duracell Powerpack 450 with Voice is designed to be rugged to stand up to road trips, picnics and camping,” said Rick June, Duracell vice president and general manager. “It also provides the reassurance of a night light and a comforting voice. When you are away from home, it’s great to know you have a power backup that can also help perform the most obvious and crucial road fixes.”

New study shows glaring unpreparedness for power outages
Americans today are more dependent than ever on their electronic devices, especially when it comes to staying in touch with the important people in their lives. Yet, when it comes to being prepared for something as simple as a loss of power-at home or on the road-most people are not as ready as they should be, according to a survey by Xantrex Technology Inc. and Duracell. A startling 91 percent of Americans surveyed admit that outages make them anxious, yet most of them have not taken the necessary precautions to prepare. Sixty-one percent report they do not have any backup power sources in their homes.1

Americans who travel are no more prepared with power on the road: 71% do not have an emergency preparedness kit in their vehicle, and only 11% have an independent jump-start solution that does not require another vehicle’s assistance.1 Duracell Powerpack 450 with Voice helps Americans have peace of mind at home and while traveling.

These power solutions are available online and at select mass and specialty retail stores nationwide. Visit www.duracellpower.com to learn about the full line of products.

These new products are being introduced through Duracell’s business alliance with Xantrex Technology Inc., which began in June 2007. Xantrex is an innovator in portable power and backup power products. Xantrex solutions allow consumers to operate and charge mobile electronic devices such as laptop computers, PDAs, cell phones and more, so they can stay productive when on the go. Xantrex also provides portable and home emergency backup power sources, and smart charging capabilities for automotive batteries.

1 “Are You Prepared with Power?” Xantrex Technology Inc. Survey, 2008