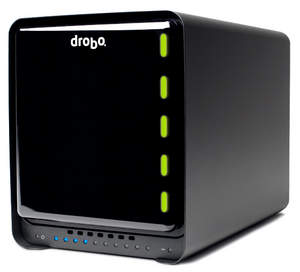 By integrating network file sharing capabilities and automated data protection with Time Machine, the Drobo FS greatly simplifies data sharing and backup for connected home, home office and small office users. Based on Data Robotics’ revolutionary BeyondRAID technology and built on Drobo’s flexible platform for adding features and capacity as needed, the Drobo FS can quickly and easily be customized and scaled to meet current or future storage requirements.

“Many Mac users want a network storage solution to use with Apple’s Time Machine for easy, automated backup of their data,” said Mark Fuccio, senior director of products and markets at Data Robotics. “The Drobo FS delivers the most seamless support for Apple Time Machine of any network storage system on the market today. Using Time Machine with Drobo FS is as easy as clicking one box in the Drobo Dashboard software, with no need for confusing, complex command line work. The combination of Apple’s and Data Robotics’ proven technologies offers Mac users unsurpassed simplicity for storing, sharing, and backing up their data.”

Drobo FS users are now able to pre-define a limit on how much storage will be used for Time Machine backups. Previously, Time Machine would consume capacity until it was gone and then delete the oldest backups to make room for new backups. The Drobo FS platform enables multiple Mac users on a network to automatically and simultaneously back up to the same Drobo FS.

Richard Harrington, founder and CEO of RHED Pixel, explained: “At RHED Pixel we have a team of motion graphics artists working on multiple computers. Often times they need to share a pool of assets for big jobs. We found we were losing a ton of time duplicating data and shuttling drives around the office. The work is also really demanding on hard drives. We have had four drives fail in the last three years. We use Time Machine to protect against drive failure constantly. We use a Drobo FS both to share project assets between artists and for Time Machine backup. Each workstation has its own share for Time Machine. Drobo FS’s ability to share files between users and to replace individual backup drives on the fly make it the most cost effective solution on the market.”

Powering Drobo FS is a dual core microprocessor: one core runs Drobo’s BeyondRAID code while the other core runs an embedded Linux server for file sharing and running DroboApps from third party developers. Data Robotics has enhanced the source code for Netatalk, an open source implementation of AFP (“Apple File Protocol”) to support Time Machine by controlling the amount of disk space used for backups. Data Robotics has donated source code for its enhancements to the project. These are available in Netatalk 2.05, or later, for all developers and users.

Features and Benefits of using Drobo FS with Time Machine

About Data Robotics
Data Robotics, Inc., the company that delivers the best storage experience ever, develops automated storage products designed to ensure data is always protected, accessible, and simple to manage. The award-winning Drobo storage arrays are the first to provide the protection of traditional RAID without the complexity. The revolutionary BeyondRAID technology frees users from making the difficult and confining choice of “Which RAID level to deploy?” by providing an unprecedented combination of advanced features and automation, including single- and dual-drive redundancy, instant expansion, self-monitoring, data awareness, self-healing, and an easy-to-understand visual status and alert panel.