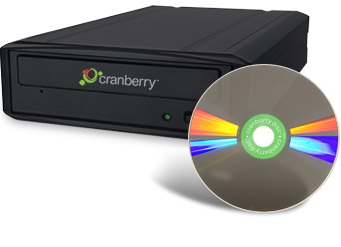 Archival DVD by Cranberry Carves Your Memories in Stone

The Cranberry DiamonDisc™, invented by professors at BYU and commercialized by Springville, Utah startup Millenniata, is now available to consumers for less than $30 each. This new disc is the only permanent storage solution available on the market for digital files including photos, videos and electronic documents.

Both the National Archives and the Library of Congress have warned consumers that home-burned DVDs unreliable and may not be readable beyond two to five years.

David McInnis, devoted father of four and founder of Cranberry DiamonDisc recalls that he was shocked when he first learned that all of his family’s treasured digital memories were at risk.

“I was under the assumption that DVDs were a safe storage medium” says McInnis, an avid family photographer. In 2005, McInnis began the quest for a permanent solution. In 2007 McInnis met with the founders of Millenniata, a Springville, Utah based startup. “I was immediately captivated by the possibilities of their discovery,” continued McInnis, “Inspired by ancient Anasazi Indian petroglyphs, it was a simple solution to a real problem.”

“The Cranberry DiamonDisc is playable on most regular DVD drives today and will last as far into the future as we can imagine,” McInnis says. “Who wouldn’t want to preserve their family or business legacy for generations to come?”

About Cranberry
Cranberry is the exclusive licensee of the Millenniata M-Arc disc for the home and personal use customer. Cranberry is a Ferndale, Washington consumer products company founded by entrepreneur David McInnis.