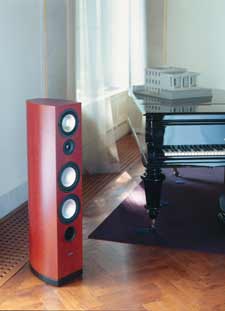 Canton, Germany’s leading manufacturer of high-performance loudspeakers, has introduced a line of high-end music and home theater speakers called Vento. Named after the Italian word for ‘wind,’ this four-model line features gracefully curving cabinetry reminiscent of a fine violin. Unlike a violin, however, there is nothing delicate about the rugged, pressure-laminated monocoque construction, which provides superior stiffness and sonic neutrality compared to flat sided speakers. This new cabinet design, coupled with significant improvements to the transducers and crossover network, results in a line of speakers with higher output levels, extended treble response, more bass, and significantly lower distortion levels than competing products.

Using a technique is similar to that used to manufacture high-end pianos, the Vento line’s curved panels are made from a thick, six-layer laminate of wood and wood fiber composites molded one layer at a time under very high pressure. This creates an incredibly stiff and sonically neutral enclosure. The outer layer is finished with either cherry wood or silver lacquer.

“The Vento line represents a new evolutionary branch on the Canton family tree,” said the company’s chief designer, Frank Gobl, “Like all our speakers, appearance follows function, with the inherently greater stiffness of the curved, monocoque structure acting to reduce panel resonances and eliminate internal parallel surfaces. It also provides for a relatively high internal volume while maintaining a narrow front baffle, and a very elegant and unobtrusive appearance.”

In spite of its new appearance, Vento is unmistakable as the product of Canton’s three-decade history of continuous improvement in all areas of research, development, engineering, design, and manufacturing. In Vento, Canton has made several significant improvements in its drivers and crossover design that help this speaker to set new standards for sound quality and performance.

All loudspeakers consist of a combination of parts that must function as a complete system, and no single part functions in isolation. Since Canton designs and builds all of its own drivers, cabinets, and crossovers, the company has much greater control over every part of they system than most other brands. The company’s extensive computer-aided research, development, and manufacturing systems are used to optimize each component part with the goal of optimal total system performance.

One of the key elements in these speakers’ natural sound reproduction is their use of the newest variant of company’s ADT-25 one-inch aluminum-manganese dome tweeter. This powerful driver varies from earlier versions with a new flared front plane which acts to improve high frequency dispersion, off-axis linearity and to boost efficiency by 2- to 3-dB. The driver also uses a new surround design that allows the system to operate at higher frequencies without break-up or distortion. Like earlier tweeters, the Vento’s uses Canton’s signature one-piece aluminum-manganese tweeter dome and voice-coil former. By combining the dome and former in one piece instead of two, this tweeter provides superior high frequency performance and allows the dome to function as a heat sink for the voice coils.

The 7-inch driver, which is used as the midrange on the Vento 809 DC and as both a midrange and bass driver on the others, has an aluminum cone with a concave dust cap, and a powerful magnetic system. The wave system (cone, dust cap, and surround) is modeled on that used in the Karat Reference line but with a new cone shape, improved spider, and a totally new sinusoidal surround. These changes, plus refinements in the magnetic system result in a 30- to 40-percent improvement in excursion range and increases output by 3 dB.

The two 8-inch woofers used on the Vento 809 DC are Canton’s largest aluminum cone drivers. They have new sinusoidal surrounds, improved speaker coils, and new double-ferrite motor for improved excursion linearity, higher output levels and low distortion. The bass performance of the Vento 809 DC and Vento 807 DC are further enhanced by the use of Canton’s signature Displacement Control technology, which eliminates unwanted excursions below the normal operating frequency of the speaker, and especially infrasonic oscillations. DC technology also provides a strong boost in low-end response, and dramatically reduces harmonic distortion.

The Vento 802 is a two-way bass-reflex design with a rear port. It is ideal for pedestal mounting in a compact stereo system, or as a surround speaker in a home theater. The Vento 805 CM center channel speaker is a 2-1/2-way bass-reflex design with a rear port, and it has been optimized for horizontal mounting. The driver magnets have computer-optimized magnetic shielding. A curved base allows the speaker to be tilted up or down to suit acoustics.