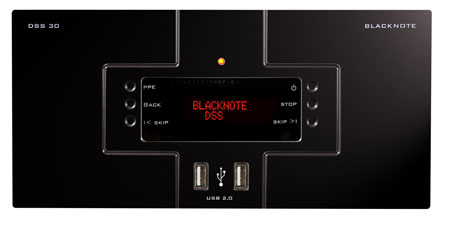 DSS 30 by Blacknote Plays any Audio Format from Any Audio Source
The DSS 30 by Blacknote, a supplier of innovative, high-quality digital audio products, is a means of storing and accessing digitally encoded music that transcends the limitations of more conventional devices. It possesses a powerful, 24-bit, high-performance Digital-to-Analog converter (DAC) using a sophisticated solid-state design with no moving parts. It is capable of playing music from any audio format directly from any kind of external device, from thumb drive to disc player, without first converting the music to another format.

The DSS 30 is compatible with Wav, Flac, AAC, OGG, DFF and WMA files, frequently used compressed formats such as MP3, MP4 and M4O — and many more. Using its USB ports, it accepts memory sticks, hard drives, PCs, and CD-Rom players. A built-in Windows-Directory program organizes custom playlists in a variety of ways, and a large, bright, two-line display shows key information about individual tracks, including, titles, times, and formats.

The DSS 30 is designed using the open-source Linux platform, and operated through a custom Texas Instruments microprocessor with specially written software. A custom DAC by AKM and Burr-Brown manage the digital-to-analog stage. Users control the DSS 30 through the supplied remote control or a series of buttons on the front panel.

The DSS 30 includes a 4-GB internal memory that can be expanded by an external hard drive, and also includes a removable Secure Digital (SD) memory card. Connections include two USB 2.0 ports on the front, two more USB ports on the rear panel, a PC input, a 75-ohm RCA input, stereo RCA outputs, balanced XLR outputs, and an Ethernet port allowing use in a LAN network. The DSS 30 can also be used in a wireless mode and, using its coax input and output, as a traditional high-end DAC for CD transports.

About Blacknote
Blacknote is a division of Goldenote, and a supplier of innovative, high-quality digital audio products designed for demanding audio enthusiasts. Blacknote designs every component in its products, including microchip controllers, digital CD and DVD transports, high-definition wireless and WiFi connections, power supply rectifiers and current generators in cooperation with such companies as Texas Instruments and Analog Devices. As a result, Blacknote offers some of the most innovative audio products available. For further technical information, visit www.blacknote.eu