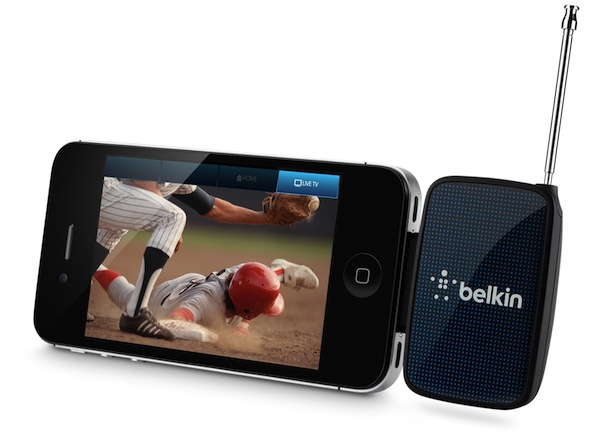 Belkin today announced an adapter for iPhone or iPad with 30-pin dock connectors, which enables live broadcast television on the aforementioned Apple mobile devices, even without an Internet connection. The new Belkin Dyle Mobile TV Receiver (model F5L110) decodes over-the-air broadcast HDTV signals just like antennas of the past.

“While mobile broadcast technology has been around for a while, the Belkin receiver accessory with Dyle mobile TV enables consumers to receive local broadcast television on a device they already own,” said Nate Kraft, director of product management at Belkin. “It’s plug-and-play simplicity, with no wireless data limits or the need for Wi-Fi. Consumers can enjoy live TV anywhere—from the waiting room to the bus stop.”

Weighing less than six ounces and less than half the size of a deck of cards, the Belkin receiver with Dyle mobile TV is a compact and portable accessory that easily fits into a pocket or small purse. To enable, simply plug the accessory into the iPhone or iPad’s 30-pin connector, extend the flexible titanium antenna for maximum reception coverage and launch the Dyle TV app, currently available for free in the App Store. The Dyle TV app features an easy-to-navigate channel guide that shows the user which local stations are available in each market for users to watch live, local television. Channel availability will vary by location; for more information, please see the Dyle service map, which currently shows 37 major markets across the country.

“The Belkin accessory, in combination with the Dyle app, turns the large existing base of iOS smartphone and tablet devices in the market today into portable TVs,” said Salil Dalvi and Erik Moreno, co-general managers of MCV. “We have worked hard to amass a large coalition of broadcasting partners to offer live programming that consumers want. It’s an exciting development in the progress of mobile TV as we continue to give consumers choice across various mobile devices and platforms.” 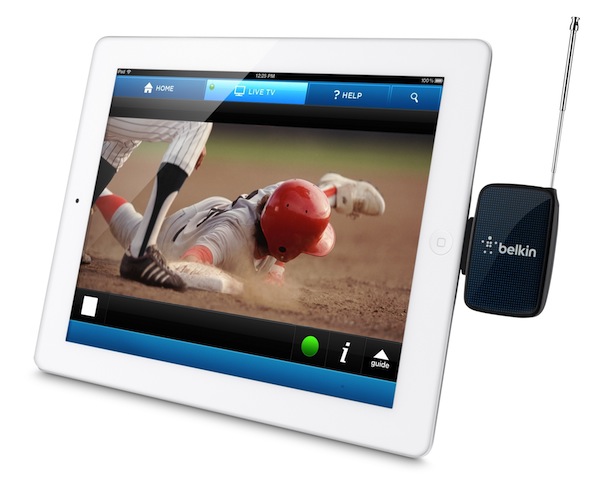 Pricing and Availability
The Belkin Dyle mobile TV receiver (F5L110) retails for $129.99 and will be available today at Belkin.com and for pre-order on Amazon.com, and comes with a neoprene carrying case. Dyle mobile TV services are available immediately without a subscription fee, which is subject to change at any time (coverage varies in participating markets, not all stations are available in all markets).