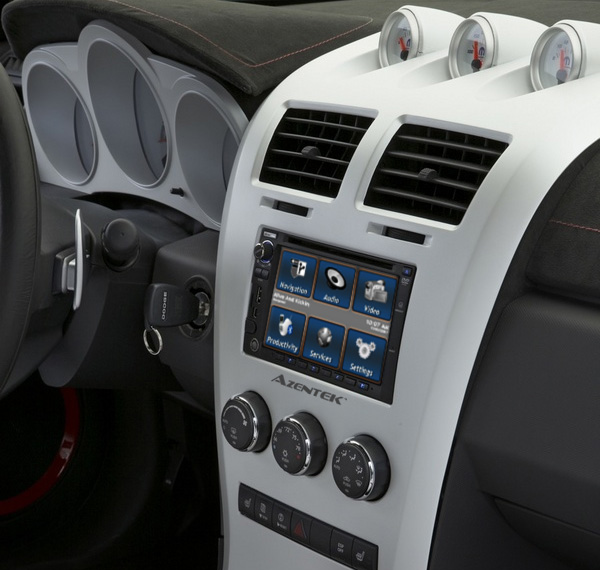 Grand Blanc, MI, November 7, 2007 — Azentek, LLC., in partnership with Microsoft, made quite a bit of noise at this year’s SEMA show with the all-new Atlas CPC-1000 in-vehicle computer, preloaded with high-fidelity digital music provided by MusicGiants.

The Atlas is a double-din “all-in-one-chassis” multimedia infotainment system based on Intel architecture that is designed to replace the existing radio in a vehicle. Running the Windows Vista operating system, it features a very long list of computing and entertainment capabilities including voice recognition, CANbus integration, Bluetooth, AM/FM/Satellite/HD, CDRW/DVD/MP3/WMA, GPS navigation, built-in WIFI, and much more!

“We showed a very early concept of the Atlas at the SEMA show last year and received very positive feedback,” said Johnny Cooper, Azentek’s President & CEO. “After a full year of additional development, taking ideas and suggestions directly from our customers, we are back this year with a remarkably impressive new version that is almost completely ready for market.”

MusicGiants, the leader in high-definition downloads, brings the Atlas to a level of entertainment far exceeding that of any in-car multimedia product presently on the market. Through its exclusive Music Concierge Collections, customers can have the Atlas system installed in their car, pre-loaded with their favorite HD music and ready to take on the road.

“Our relationship with Azentek is proof positive that MusicGiants is arriving as the go-to service for hardware manufacturers and end users who are looking for uncompromised, high-quality sound to bring their cutting-edge car audio systems alive,” says Scott Bahneman, CEO of MusicGiants. “We are pleased to announce this partnership and we look forward to the momentum behind our service as it continues to build.”

Rather than being confined to a single booth this year, Azentek had a presence in multiple areas throughout the show. With the company’s 2007 GMC Acadia demo car on display as a SEMA featured vehicle in the south hall, 2007 Dodge Avenger in the Chrysler booth, 2007 Chrysler Town & Country in Mopar Alley, a truck in the Digital Designs booth, and a main company booth in the north hall (#10374), Azentek was prepared to take SEMA by storm!

Amazingly, the company still plans to outdo themselves with even larger plans for the upcoming Consumer Electronics Show. “Since we will begin shipping our full in-car PC product line at the beginning of 2008, we are preparing for a massive grand launch at CES. I can’t quite say exactly what we have planned yet but I can promise that it will surely be a major highlight of the entire show,” commented Cooper.
Intel is a trademark of Intel Corporation in the U.S. and other countries.

About Azentek
Headquartered in Grand Blanc, MI, Azentek is a major manufacturer of portable and in-vehicle computer solutions, including the private labeled FordLink system currently available in Ford trucks. In early 2008, Azentek will begin shipping the Atlas CPC-1000, their latest flagship in-dash radio replacement PC. Among the first of its kind, this technologically advanced computer has been designed specifically around the automotive industry standard 2-DIN radio space and will fit into over 180 million vehicles on the road today. For more information, please visit http://www.azentek.com.

About MusicGiants
MusicGiants launched in 2005 and is the only music download service to offer high-definition, digital recordings from all of the top music companies such as Concord Music Group, EMI Music, Sony BMG Music Entertainment, Universal Music Group, and Warner Music Group. MusicGiants’ use of the WMA lossless format provides up to seven times the sound quality of any other download service. MusicGiants is the perfect companion for car audio systems and anywhere else that sound quality matters. For more information, visit http://www.musicgiants.com. Media Contact: Katherine Ryan (775) 832-5692, kryan@musicgiants.com