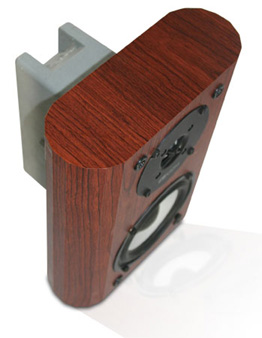 The Problem: Many current in-wall speakers rely on the cavity behind the wall for speaker loading but have widely variable performance because the sheetrock wall surface vibrates with the rear output from the drivers, producing deeply colored and inaccurate sound. And if no in-wall cabinet is included, the driver’s rear output will produce distorted sound in the neighboring room.

The Solution: Overcoming these drawbacks, Axiom’s new Architectural W2, W3, and W22 on-wall/in-wall hybrids feature fully integrated carefully tuned enclosures that recess into the wall, combined with an attractive exterior finished baffle that keeps the speaker’s drivers well away from the sound-degrading effects of the wall surface. And that proprietary enclosure means that the uncolored wide-range sound and bass loading will remain consistent no matter which wall you install the speakers in.

Contacted at Axiom’s plant in Dwight, Ontario, Axiom founder and President Ian Colquhoun remarked, “These new in-wall/on-wall hybrids are a breakthrough. They sound as good as our regular bookshelf models, which means that our customers can now enjoy the benefits of an in-wall design without compromising sound quality. I’m really proud of the fact that our integrated enclosure design avoids the tonal imbalances that characterize most conventional in-wall speakers.”

A separate metal frame with self-compressing screws locks the outer speaker enclosure firmly to the sheetrock of the wall, which results in a smooth custom look, thereby eliminating the traditional box from the room by burying the loading portion inside the wall. The W series’ unobtrusive appearance solves home decorating problems by freeing up floor space, and will prove popular with custom installers and interior designers. The W series’ attractively finished front baffles come in five handsome seamless finishes (Boston Cherry, Light Maple, Mansfield Beech, Black Oak, and Eggshell White) and are also available in 12 custom finishes by special order, providing unprecedented choice at this price point.

The integral recessed wall-mount enclosure extends less than 3.5 inches into the wall, so the W series speakers mount easily in any standard 3.5-inch stud wall. A mounting template is supplied with the speakers to aid installation.

Axiom is a world leader in psycho-acoustical research, which provides the scientific basis on which all Axiom loudspeakers are designed and engineered, including careful acoustical measurements and uncompromising double-blind listening tests.