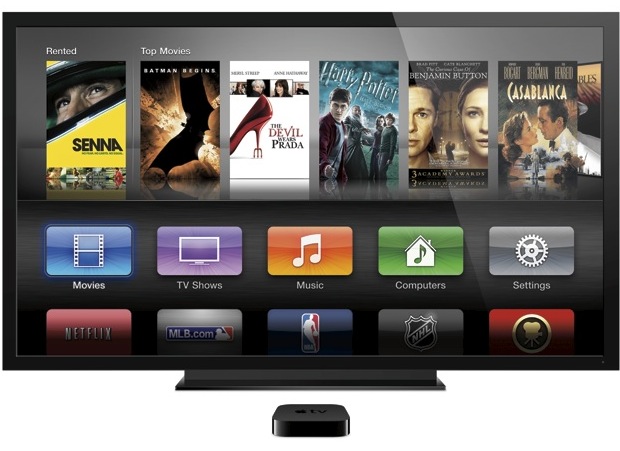 Apple today announced the 3rd-generation Apple TV featuring 1080p programming including iTunes movies and TV shows, Netflix, Vimeo, photos and more in HD. With iTunes in the Cloud, customers can purchase and play their favorite movies and TV shows from the iTunes Store and watch them instantly on their HD TV. The new Apple TV features a simpler, refined user interface making it easier than ever to access your purchased movies, TV shows and music with iTunes Match right from iCloud. With AirPlay, users can stream or mirror their favorite content from their iPad or iPhone 4S to Apple TV.

With iCloud, you can buy movies and TV shows on Apple TV and watch them on your iPhone, iPad, iPod touch, Mac or PC. iCloud also stores photos and pushes them wirelessly to all your devices including your HD TV via Apple TV. iCloud provides an incredibly easy way to get instant access to all of your content, no matter which device is being used.

Apple TV makes it easy to enjoy iTunes video, music and photo libraries from your computer right on your HDTV — and with iCloud you can instantly enjoy content that was purchased on your iPhone, iPad or iPod touch as well. iTunes Match customers can now play their entire music library from iCloud — even songs they’ve imported from CDs. Users can also control Apple TV with their iPhone, iPad or iPod touch using the Remote app, available as a free download on the App Store.

Apple TV users can choose from an incredible selection of programming including over 15,000 movies and over 90,000 TV episodes on the iTunes Store. Apple TV also offers great content from Netflix’s streaming catalog, live sports from MLB, NBA and NHL as well as Internet content from Vimeo, YouTube and Flickr.

“People are going to love streaming movies and TV shows in 1080p with the new Apple TV, and photos look beautiful displayed at the maximum resolution of your TV,” said Philip Schiller, Apple’s senior vice president of Worldwide Marketing. “Apple TV is easier than ever to use with its new icon-based interface and the ability to access your purchased movies, TV shows and music right from iCloud.”

Function101 Button Remote -- A better remote for your Apple TV

The Gadgeteer3 months ago
You Are Here