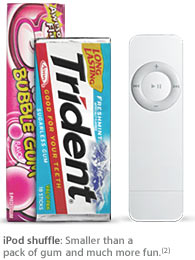 MACWORLD EXPO, SAN FRANCISCO — January 11, 2005 — Apple today introduced iPod shuffle, a breakthrough digital music player based on iPod’s legendary shuffle feature which lets users experience their music in a million different ways. Smaller and lighter than a pack of gum, iPod shuffle comes with its own lanyard so it’s ready to wear right out of the box. iPod shuffle works seamlessly with iTunes’ innovative AutoFill feature which automatically selects songs from a user’s music library to fill up iPod shuffle with just one click. iPod shuffle is the most affordable iPod ever and is available in two models: 512MB holding up to 120 songs for just $99 and 1GB holding up to 240 songs for just $149.

“iPod shuffle is smaller and lighter than a pack of gum and costs less than $100,” said Steve Jobs, Apple’s CEO. “With most flash-memory music players users must use tiny displays and complicated controls to find their music; with iPod shuffle you just relax and it serves up new combinations of your music every time you listen.”

iPod shuffle is based on iPod’s pioneering and widely-used shuffle feature, which randomly selects songs from the user’s music library or playlists. In addition, iPod shuffle works seamlessly with iTunes and its innovative new patent-pending AutoFill feature, which automatically selects the perfect number of songs to fill iPod shuffle from a user’s complete music library on their computer. And at any time, with a flip of a switch on the back of iPod shuffle, users can choose to listen to their music in order rather than shuffled, perfect for listening to a favorite new album.

Users can conveniently charge and transfer music from their Mac or PC by plugging iPod shuffle directly into a USB port. iPod shuffle doubles as a portable USB flash drive with up to 1GB of storage space to back up personal files and exchange them between computers.

iPod shuffle is the newest member of Apple’s wildly popular iPod family for both Mac and PC which includes the fourth generation iPod, the iPod mini, the iPod U2 Special Edition and iPod photo. More than 10 million iPods have been sold since it was introduced, and it is the number one selling digital music player in the world.

The popularity of iPod has also created a booming accessory market, and iPod shuffle is being introduced with several optional accessories. In addition to the included lanyard, there is an optional armband that makes iPod shuffle perfect for many athletic activities. An optional sport case keeps iPod shuffle safely protected from outdoor elements with its clear case and neck strap. An optional dock serves as an elegant and convenient home base for syncing and charging iPod shuffle, and an optional USB power adapter easily charges iPod shuffle when it’s away from the computer by simply plugging it into any electrical outlet. Users can extend the iPod shuffle battery life (up to 12 hours) with an optional battery pack that holds two AAA batteries and keeps the music playing for up to 20 additional hours.

Pricing & Availability
The 512MB and 1GB models of iPod shuffle for Mac or Windows are now shipping for a suggested retail price of $99 (US) and $149 (US) respectively, and include earbud headphones, lanyard and a CD with iTunes 4.7.1 for Mac and Windows computers. iPod shuffle is available through the Apple Store (www.apple.com), Apple’s retail stores and Apple Authorized Resellers. The iPod shuffle arm band, sport case, battery pack, dock and USB power adaptor optional accessories will become available over the next few weeks for a suggested retail price of $29 (US) each.

Pocketables13 years ago
You Are Here