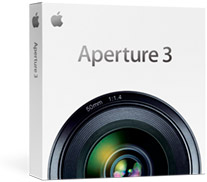 With 200 New Features and Enhancements Including Faces, Places & Brushes

Apple just introduced Aperture 3, the next major release of its powerful photo editing and management software, with over 200 new features including Faces, Places and Brushes. Building on the innovative Faces and Places features introduced in iPhoto ’09, Aperture 3 makes it even easier and faster to organize large photo libraries. Aperture 3 introduces new tools to refine your photos including Brushes for painting image adjustments onto parts of your photo, and Adjustment Presets for applying professional photo effects with just one click. Stunning new slideshows let you share your work by weaving together photos, audio, text and HD video. 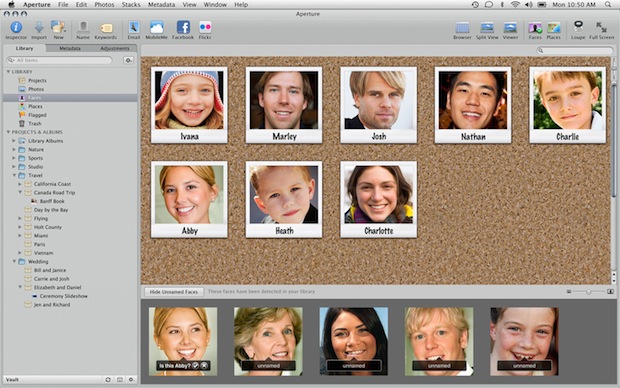 “Millions of people love using iPhoto to organize, edit and share their digital photos,” said Philip Schiller, Apple’s senior vice president of Worldwide Product Marketing. “Aperture 3 is designed for both professionals who edit and manage massive libraries of photos and iPhoto users who want to take their photos further with easy-to-use tools such as Brushes and Adjustment Presets.”

“Aperture 3 gets it right,” said National Geographic photographer, Jim Richardson. “The image editing tools are exactly what I have been asking for, they’re so easy to use and give me a level of control that I never even thought possible.”

“I chose Aperture because it was the most powerful archiving application around, but it’s now an unbelievable imaging tool as well,” said Bill Frakes, Sports Illustrated staff photographer. “I am beyond impressed with the massive changes made in Aperture 3.” 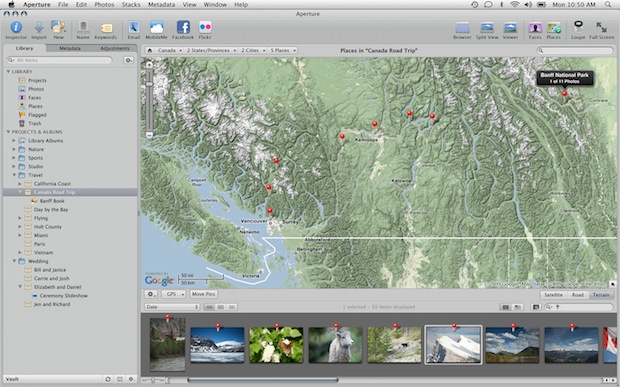 Aperture 3 allows you to organize large photo libraries with even more flexibility using Projects and the new Faces and Places. Faces uses face detection and recognition to find and organize your photos by the people in them. You can view faces across your entire photo library or view just the faces that appear in selected projects. In a new view that speeds up the organization process, Aperture 3 displays faces that have been detected but haven’t yet been named. Places lets you explore your photos based on where they were taken, and like in iPhoto, Places automatically reverse geocodes GPS data into user-friendly locations. In Aperture 3, you can assign locations by dragging-and-dropping photos onto a map or by using location information from GPS enabled cameras, tracking devices or your iPhone photos. 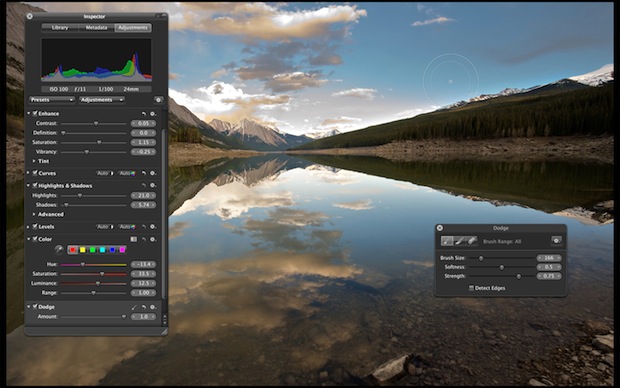 The new Brushes feature allows you to add professional touches to your photos by simply painting effects onto the image. Aperture 3 includes 15 Quick Brushes that perform the most popular tasks like Dodge, Burn, Polarize and Blur, without the complexity of layers or masks. Brushes can automatically detect edges in your images to let you apply or remove effects exactly where you want them. Aperture 3 includes dozens of Adjustment Presets that apply a specific style or look to the entire image with just a click. You can create your own custom presets or explore the techniques of other photographers by importing theirs.

Aperture 3 makes it easy to share your work with stunning slideshows that weave together photos, audio, text and HD video. You can select one of six Apple designed themes or choose your own transitions, background, borders and titles, and even add your own soundtrack. You can export your slideshows directly to iTunes to take with you on your iPhone or iPod touch. You can also share photographs as beautiful prints, create custom-designed hardcover books and publish to online photo sharing sites like Facebook and Flickr, right from Aperture 3.