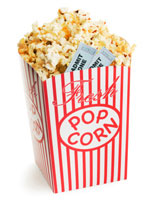 A decade ago, movie fans who wanted to forgo paying for pricey tickets and popcorn waited an average of five months before they could watch a film in their own living rooms. Today, the window between theatrical releases and distribution via DVD and other channels like cable television and the web has shrunk to four months or less — and in some cases has even disappeared, with films being made available through video-on-demand services the same day they debut.

According to Wharton faculty, declining DVD sales, the advent of web streaming and other changing industry dynamics mean that studios are likely to continue experimenting aggressively with movie release timing. Still, the pleasure of watching a movie in a darkened theater is not likely to go away any time soon, they say.

The movie release window is a Hollywood construct where each distribution channel such as DVDs, cable television pay-per-view services and subscription channels like HBO, and Internet companies like Netflix get access to distribute films following their theatrical debut. Other forms of content have release windows as well: Books, for example, have defined sales periods for hardcover versions before they are sold in paperback. In the movie industry, billions of dollars are at stake with regard to the timing of releases in various distribution channels. According to AC Nielsen, total U.S. and Canadian box office receipts totaled $9.78 billion in 2008. The same year, U.S. consumers spent $22.4 billion on DVD sales and rentals, according to a report by research firm Digital Entertainment Group.

"The decision of when to release a movie and to what channel is a strategic issue for the industry," says David Hsu, a management professor at Wharton. "At the end of the day, the studios are trying to maximize profits. The various distribution models revolve around maximizing the revenue from each type of consumer."

For now, the goal of maximizing revenues by shortening release windows is a moving target for movie studios, especially in a digital age when audience members are more tempted to skip out on high-priced seats and popcorn to see movies wherever and whenever they please in whatever format is most convenient for them. "Models are likely to be tweaked and the release schedule is going to be fluid," says Kendall Whitehouse, director of new media at Wharton.

Groups like the National Association of Theater Owners (NATO), which represents movie theaters, have argued for maintaining the standard movie release timings. NATO's campaign includes movie industry luminaries arguing that taking away the release window would remove the "magic" from the industry. "The theatrical debut of a movie is the debutante ball for the industry," notes Joseph Turow, a professor at the University of Pennsylvania's Annenberg School of Communication. "So much goes into that first release that it affects the other windows."

Closing Windows
What's less clear is what happens to those revenues when the time between a film's theatrical release and home entertainment debut shrinks. In 1997, the average video release window was five months and 22 days. In 2009, the time from the movie theater to DVD was four months and 11 days, according to NATO data; some studios, such as Fox and Sony, are pushing even shorter timelines. So far in 2009, the average time between theatrical release and DVD for Fox has been three months and 29 days. Sony is down to four months and four days on average in 2009.

Since the studios hold all the cards, they are experimenting to compress release windows to recoup the big investments needed to make films. In the past, "theater owners negotiated for exclusivity time, and studios allowed them," says Jehoshua Eliashberg, a marketing professor at Wharton. "The time between each [distribution channel] is negotiable. But the studio makes the ultimate choice."

Studios have been largely quiet about any plans to alter movie release windows, but a few executives have hinted that falling DVD sales could spark plans to experiment with new methods of distribution. According to NATO, gross box office receipts have risen between 2005 and 2008. The average movie ticket cost $7.18 in 2008, up from $6.21 in 2004. The number of movie screens has increased slightly every year for the last four years to nearly 39,000. However, DVD rentals and sales peaked at $24.1 billion in 2006 and have slid to $22.4 billion in 2008, according to Digital Entertainment Group. Speaking on an earnings conference call in April, DreamWorks Animation SKG CEO Jeffrey Katzenberg said the DVD industry is shifting as outlets like Netflix and Redbox gain momentum, and streaming over the Internet becomes commonplace. "I think these [developments] are changing the dynamics for the DVD business as a whole and for general movie releases as a whole," said Katzenberg.

Recent events indicate that movie studios are getting more aggressive about compressing movie release windows and are trying to get ahead of industry shifts:

Peter Fader, a marketing professor at Wharton, expects the experimentation to continue to the point where movies are released simultaneously under new business models. "In the old days, the release window existed because it was impossible to release movies simultaneously. There were only so many copies of the film. Movies would start in New York or Los Angeles and work across the country. That release window was created for logistics," he says. "[Studios] should not want to do windowing at all. They should get business to a point where it can deliver content as broadly as possible."

Independent film buffs have already gotten a taste of simultaneous releases through cable television's Sundance Channel. In August, Sundance introduced a video-on-demand service called "Sundance Selects" that allows viewers to watch films on their televisions the same day they are released in theaters. Whitehouse says the entertainment industry should experiment with various options to find out what consumers are willing to pay for. "The conversation about the release window tends to be all or none: Do you make all movies available simultaneously or keep window as it is? There are a lot of additional opportunities to fine tune this [kind of offering] based on viewing patterns and what generates the most revenue."

Will Moviegoers Stay Home?
As the studios experiment with shortening the movie release window, many questions are emerging. Will a shorter release window influence consumer behavior and harm movie theaters? Is watching a movie at home a direct substitute for the theater experience? What would theaters do to adapt? What new pricing models are possible under a simultaneous release scenario?

Turow agrees. "Right now, there's a certain segment of the public that likes to go to the movies. That segment will always exist. The desire to go to the theater is a combination of the [movie's drawing power] and the desire to get out of house." Turow expects, for example, that people who date will continue to see the theater as a worthwhile social venue. Nevertheless, to hedge their bets, movie chains such as National Amusements are experimenting with "entertainment concepts" that involve adding bars and in-seat dining to their movie complexes.

What's unclear, however, is whether box office receipts will be impacted at all by the simultaneous release of movies to the theater, DVD, cable and streaming Internet services. "There is a basic cannibalization question," says Turow. According to Hsu, the effects of a simultaneous movie release in various distribution channels would largely depend on pricing models. Studios could compress or eradicate the movie release window and keep all parties happy if they could get the price discrimination strategy right — that is, charge different prices for the same item based on demand. "The consumption patterns and whether they change will depend on the entertainment bundle provided and the pricing," says Hsu. "The industry could deploy a price discrimination strategy based on the window [during which] consumers view the movie."

For instance, studios could charge higher prices for a first-run film at home. Whitehouse paints a scenario where a consumer at home may pay $50 to view a first-run movie. At that price, the pay-per-view option may equal the cost of bringing the family to a movie theater. Other consumers would go to theaters to get a more communal viewing experience and perhaps perks such as a 3D experience. Still others would wait to see the film for a lower price later.

According to Wharton marketing professor Eric Bradlow, consumers will ultimately demand first-run content in multiple distribution channels. "Consumers get utility from watching content with others. Consumers get utility from watching content on a big screen. Consumers get utility from watching content when it is first out," says Bradlow. There is a marketing upside that should be taken into account, too, he adds. "A natural consequence of simultaneous release is greater awareness and hence greater penetration of the product." Typically, movies have a marketing campaign when the film hits the theaters and when they go to DVD. "The movie industry should be more focused on growing the market," says Fader. "The vast majority of Americans don't consume a movie. A simultaneous release would get many people at once. The way to do that is to have a well integrated distribution and campaign. Fire all guns at once."

Big-ticket Overhead
Hsu notes that the real hand wringing over simultaneous movie releases involves theaters' overhead. Theaters have large upfront costs that they have to cover and they don't want to risk the revenues generated from having an exclusive period to exhibit films. Aside from blockbuster movies, theaters rely on high-priced concessions. Under a simultaneous-release scenario, what theaters pay studios and what they charge consumers would have to change, says Hsu.

"Ultimately this comes down to a pricing and contract issue; if there's a simultaneous movie release, the theaters should get a discount to show it," Hsu notes. In addition, theaters could engage in price discrimination and charge more during peak demand periods, say a Friday or Saturday night showing. According to Hsu, theaters could implement more price tiers based on demand.

Hsu doesn't see a gradual evolution toward simultaneous movie releases, but a situation where one studio leads and others have to follow. "There will be a tipping point where simultaneous releases become legitimate."

When that time comes, theaters will have to adapt by expanding into other vertically integrated entertainment options and adjacent categories such as retail. That evolution will have to come quicker if consumers choose their home theaters over the movie complex. Theaters have already begun to differentiate themselves with larger screens from companies like IMAX, which has screens in 403 theaters around the world, and 3D technology. Ideally, each distribution channel would have its unique value proposition, say experts at Wharton. Whitehouse adds that studios couldn't abandon theaters. "The theaters are a major revenue stream and the studios are reluctant to upset that apple cart."

"You can't jump to conclusions that simultaneous release would kill movie theaters," says Fader. "If that's true, then the industry is not giving reasons for consumers to go. The theater should be more than going to see a big screen and eating overpriced food. Make it more of an event."