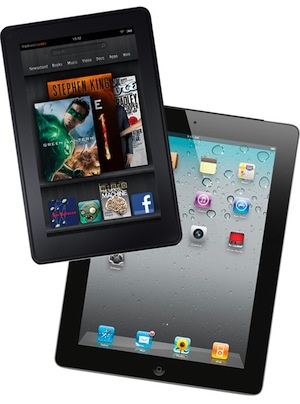 The Kindle Fire is $300 cheaper than the iPad 2 so they really should not be compared. If you want an iPad, nothing else will do.

However, Amazon's Kindle Fire is an awesome device. Mine arrived the other day and I absolutely love it. It's a good e-reader. I like the screen. Video looks good, audio is acceptable and, for $200, what's not to love?

Is it anything like an iPad 2? No. Not in any way. But it is at least $300 dollars cheaper and that makes it the right device for several different users.

Here's how to decide which if the Kindle Fire is right for you:

And, most importantly, if you think that you want all the things an iPad can do, but you're not willing to spend the $300 extra dollars to purchase one, do not purchase the Kindle Fire thinking that it's a poor man's iPad. That does a disservice to the Kindle Fire and to you. The Kindle Fire is not pretending to be an iPad, people are making the comparison because it's an easy comparison to make. Don't!

The Kindle Fire is the perfect gift for someone who reads and wants to consume Amazon content. Think of it as a portable access point to amazon.com. It also has some great cloud storage features and, if you've got a robust WiFi connection available to you, you will really enjoy streaming music and videos from the cloud.