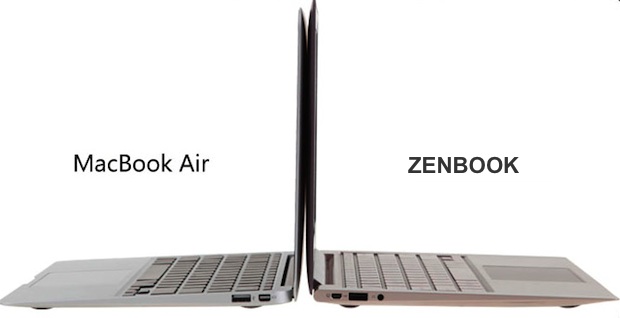 If you are not a Mac person, but always wanted a computer as thin and sleek as the MacBook Air, there is now a solution for you. It’s called the Asus Zenbook. For all intents and purposes, it’s a Windows version of a MacBook Air. Zenbooks are available in different hardware configurations that are almost identical to MacBook Airs. The comparisons don’t need to be on a chart, the systems just match up — from pricing: $999 – $1,500, to Ram: 4 GB, to Storage: up to 256 GB, and even Battery Life: 5-7 hours. You can configure an Asus Zenbook to look, smell and feel just like a MacBook Air.

An Apple MacBook Air is 11″ x 13.” An Asus Zenbook is 11.6″ x 13.3.” Both have well made metal cases. The Zenbook is a little heavier than the MacBook Air, but not by much. What is the biggest difference? MacBook Airs run OS X Lion and Zenbooks run Windows 7.

I ran the Asus Zenbook through its paces and I’ve got nothing but praise for it. The review unit I was given had an i5 Intel processor and it rocked every speed test, memory test, etc. The keyboard isn’t backlit, but I don’t think that matters very much. And, if you’re into music, the Zenbook speakers are an order of magnitude better than the ones in the MacBook Air. (Although, they still leave you wanting.)

Like my MacBook Air, the full-powered, top-of-the-line Asus Zenbook is powerful enough to be a complete laptop replacement. But, remember, these computers only have 13″ screens. Perfect for word processing while sitting in a coach seat on an American Airlines 757 when the guy in front of you reclines his seat — not great for 60 column spreadsheets no matter where you are.

Should you get one? If you’re a PC person, but you’ve always wanted a MacBook Air, the Asus Zenbook is “the” computer for you. It’s awesome!

At the same time, I love my new MacBook Air. I got it a few weeks ago and it is truly everything I ever wanted in a laptop. It’s light, it’s fast and it’s got enough horsepower to accomplish even the most difficult computing tasks. I wrote a glowing review about it and, if you’re a Mac person, there is nothing about this computer that you’re not going to love.