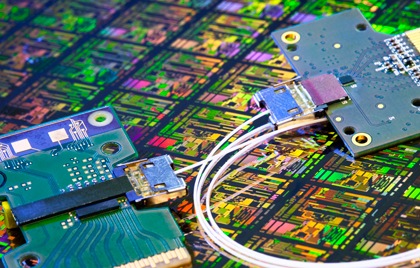 Intel Corporation has announced an important advance in the quest to use light beams to replace the use of electrons to carry data in and around computers. The company has developed a research prototype representing the world's first silicon-based optical data connection with integrated lasers. The link can move data over longer distances and many times faster than today's copper technology; up to 50 gigabits of data per second. This is the equivalent of an entire HD movie being transmitted each second.

Today computer components are connected to each other using copper cables or traces on circuit boards. Due to the signal degradation that comes with using metals such as copper to transmit data, these cables have a limited maximum length. This limits the design of computers, forcing processors, memory and other components to be placed just inches from each other. Intel's research achievement is another step toward replacing these connections with extremely thin and light optical fibers that can transfer much more data over far longer distances, radically changing the way computers of the future are designed and altering the way the datacenter of tomorrow is architected.

Dramatically Increases Performance, Saves Energy
Silicon photonics will have applications across the computing industry. For example, at these data rates one could imagine a wall-sized 3D display for home entertainment and videoconferencing with a resolution so high that the actors or family members appear to be in the room with you. Tomorrow's datacenter or supercomputer may see components spread throughout a building or even an entire campus, communicating with each other at high speed, as opposed to being confined by heavy copper cables with limited capacity and reach. This will allow datacenter users, such as a search engine company, cloud computing provider or financial datacenter, to increase performance, capabilities and save significant costs in space and energy, or help scientists build more powerful supercomputers to solve the world's biggest problems.

Intel Creates World's First End-to-End Silicon Photonics Connection with Integrated Lasers
Justin Rattner, Intel chief technology officer and director of Intel Labs, demonstrated the Silicon Photonics Link at the Integrated Photonics Research conference in Monterey, Calif. The 50Gbps link is akin to a "concept vehicle" that allows Intel researchers to test new ideas and continue the company's quest to develop technologies that transmit data over optical fibers, using light beams from low cost and easy to make silicon, instead of costly and hard to make devices using exotic materials like gallium arsenide. While telecommunications and other applications already use lasers to transmit information, current technologies are too expensive and bulky to be used for PC applications.

The 50Gbps Silicon Photonics Link prototype is the result of a multi-year silicon photonics research agenda, which included numerous "world firsts." It is composed of a silicon transmitter and a receiver chip, each integrating all the necessary building blocks from previous Intel breakthroughs including the first Hybrid Silicon Laser co-developed with the University of California at Santa Barbara in 2006 as well as high-speed optical modulators and photodetectors announced in 2007. 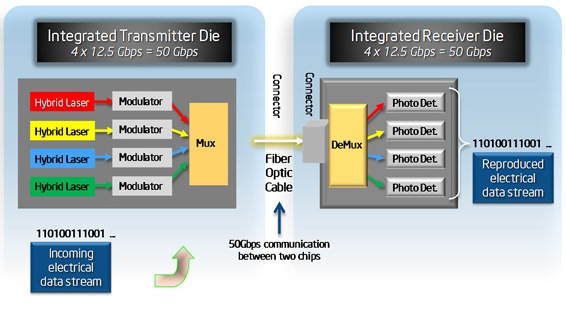 The transmitter chip is composed of four such lasers, whose light beams each travel into an optical modulator that encodes data onto them at 12.5Gbps. The four beams are then combined and output to a single optical fiber for a total data rate of 50Gbps. At the other end of the link, the receiver chip separates the four optical beams and directs them into photo detectors, which convert data back into electrical signals. Both chips are assembled using low-cost manufacturing techniques familiar to the semiconductor industry. Intel researchers are already working to increase the data rate by scaling the modulator speed as well as increase the number of lasers per chip, providing a path to future terabit/s optical links — rates fast enough to transfer a copy of the entire contents of a typical laptop in one second.

New Technology Could Revolutionize Computer Design
This research is separate from Intel's Light Peak technology, though both are components of Intel's overall I/O strategy. Light Peak is an effort to bring a multi-protocol 10Gbps optical connection to Intel client platforms for nearer-term applications. Silicon Photonics research aims to use silicon integration to bring dramatic cost reductions, reach tera-scale data rates, and bring optical communications to an even broader set of high-volume applications. Today's achievement brings Intel a significant step closer to that goal.

Build a truly great sounding hi-fi audio system for less than you think. Select from a curated list of components that work well together...