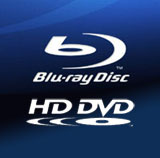 High definition televisions are expected to be hot sellers this holiday season, but consumers are likely to have a tough time sorting out the newest generation video discs and the players that go with them. The culprit: Two competing high definition DVD formats and no sign of a clear winner.

In one corner are Sony, most movie studios and a number of consumer electronics makers pitching a technology called Blu-ray. In the other corner, with the HD-DVD format, sit Microsoft and Intel along with their allied studios and consumer products companies. Both formats provide larger storage capacity than the current generation of DVDs and can store high definition full-length movies. And both sides are well funded and unlikely to cave in. In the middle are a few consumer electronics makers hoping to create players that can play both formats at a reasonable cost.

What’s striking about the two formats is that they are relatively similar in their general capabilities. Both require consumers to buy new players since they rely on blue lasers to read high-definition discs compared to the red laser in current DVD players. Both camps have signed up major studios and hardware partners, and both hope to use game machines (Sony’s Playstation 3 and Microsoft’s Xbox) to gain critical mass.

Among the differences: the Blu-ray format holds 25 gigabytesto 50 gigabytes of data with additional capacity possible to 200 gigabytes. HD-DVD holds 15 gigabytes to 30 gigabytes with a maximum of 60 gigabytes. The content partnerships favor Blu-ray, which has all of the major movie studios, except for Universal Pictures, backing it along with consumer electronics and computer companies LG Electronics, Panasonic, Samsung, Apple and Dell. HD-DVD has Universal Pictures in its corner along with Intel and Toshiba. A few industry players, such as Hewlett-Packard, Paramount and Warner Bros., have pledged support for both formats.

How will consumers react to competing formats? Historically, they put off purchases, says Wharton marketing professor David Reibstein. “This is clearly not in the best interest of consumers and it absolutely hurts demand. Holding back is a natural consequence of two competing formats.” The worry: No one wants to get stuck with outdated discs and players.

“There’s no question having two incompatible next-generation DVD formats is an untenable situation,” adds Wharton legal studies and business ethics professor Kevin Werbach. “The real question is whether either of them will make it. Today, it’s not clear why anyone would spend $800 or more on a Blu-ray or HD-DVD player, when you can get a perfectly good DVD player for $30. The difference in quality just isn’t that great, especially if you don’t have a home theater.”

Indeed, the situation has some industry players worried. Netflix CEO Reed Hastings has urged studios to support both formats in an effort to stoke demand because both camps are well funded and unlikely to give up ground.

The battle “could last quite a few years,” says Wharton marketing professor Jehoshua Eliashberg. “This format war has some similar components to Betamax and VHS, but it also has a few wrinkles never seen before,” Eliashberg says, referring to the VHS vs. Betamax video cassette format war in the late 1970s and early 1980s. Sony championed Betamax, which many viewed as a superior technology, but had to give up after the lion’s share of content became available only on VHS tapes, says Eliashberg.

As for the DVD format battle, semiconductor companies such as Broadcom, NEC and STMicroelectronics are currently working on chips to help create players that could play both of the new disc formats, according to company statements and press reports, and consumer electronics companies are reportedly planning players that can handle both formats. An LG Electronics spokesman said that the company has nothing to announce about dual mode players in the U.S. However, according to CNET UK, LG has shown prototypes at a United Kingdom tradeshow.

The Betamax comparison is apt, Reibstein suggests, but argues that the Blu-ray/HD-DVD format battle will resemble the skirmishes between Microsoft’s Windows operating system and Apple’s Macintosh platform in the early days of the PC industry. While Windows became a monopoly, Apple never went extinct like Betamax. “Apple never standardized, but survived and did well,” says Reibstein. Eliashberg agrees that the Apple analogy could play out. “This could be a lot more like Apple vs. the PC. I don’t think one of them will fade out, and both formats could coexist.”

The primary reason this format war may last is the high stakes involved. The Sony and Microsoft camps each see their chosen format as part of a multi-pronged effort to control the digital living room.

The Trojan horse for both of these formats could be video game machines. The Blu-ray format is expected to get a significant boost by the launch of Playstation 3, which can play Blu-ray movies. Sony has 111 million Playstation 2 consoles in circulation; if a significant number are upgraded to Playstation 3 systems, it will provide a sizeable installed base of Blu-ray players. Since Microsoft only offers an HD-DVD player as an optional component of its Xbox game system, the HD-DVD format may not have as much traction. “Games clearly matter here,” says Reibstein. “If enough people go down one path, others will have to make their devices compatible. A base of 111 million machines is so powerful. If you buy a Playstation, you are also buying a platform beyond games.”

However, Reibstein notes that Microsoft can utilize its resources to support HD-DVD and use the Xbox to further the format. “Taken to its extreme, this format battle is really an extension of the game wars,” he says. In a separate agreement, Microsoft announced on November 6, 2006, that it will team with movie and television studios to allow Xbox 360 customers to download video content. For now, this content can’t be burned to a DVD.

According to Eliashberg, it remains to be seen whether Playstation owners will become big fans of Blu-ray movies or simply use the console for video games. “The Playstation will help out Blu-ray, but ultimately it comes down to content and behavior. It’s not clear if gaming will be a critical factor,” he says.

Xavier Dreze, a Wharton marketing professor, downplays the game impact. “The game market is not going to be the deciding factor,” he says. “Xbox and Playstation 3 can use different media without impacting each other. The video and game markets are sufficiently differentiated that one could have different formats in each.”

If one format wins, a number of experts predict it will be Blu-ray due to its higher number of manufacturing and content partners.

Forrester Research analyst Ted Schadler said in a research note on October 5, 2006, that Blu-ray will win out because it has more support, with over 100 manufacturers compared to HD-DVD’s 10. According to Schadler, Dell, Apple and Sony will ship PCs with Blu-ray drives. HD-DVD has Toshiba in the PC fold. “This deeper support will translate into a broader assortment of products, more retail shelf space and a bigger marketing budget,” he said, adding that the Playstation 3 will also make inroads for Blu-ray.

However, content is also important. Schadler noted that Blu-ray has more movie titles. For instance, the Blu-ray collections on Blockbuster Online and Netflix outpace HD-DVD titles by a wide margin. “Content is key. The new formats are (for now) read only. This makes content even more important than in Betamax vs. VHS,” says Dreze.

“At least with Betamax you could record sitcoms [off your TV]. Here, all you can do is play pre-recorded content. If there is none [available], there is no benefit from buying the player.”

Tim Bajarin, principal analyst for Creative Strategies, agrees that the content selection coupled with the Playstation 3 and manufacturing partners favor Blu-ray. “With the studios backing [Blu-ray] and the potential for millions of Playstations eventually getting into consumers’ homes, there is a possibility that it could end up with the larger share of this market,” says Bajarin.

Not everyone is in the Blu-ray camp, however. Werbach questions whether either side will win. It’s unclear, he says, why consumers will want a physical disc when they will have digital distribution for high-definition movies through either Microsoft’s Xbox or cable operators who have invested in video on demand. In addition, Werbach says that as storage densities increase, PCs or digital video recorders could bundle dozens of movies on hard drives with automatic downloads for more titles. “The next-generation DVD players had a window of opportunity if they could have delivered a single standard at reasonable cost, but I suspect they have missed it,” says Werbach. “I personally have no plans to plug in yet another box next to the TiVo, cable set top box, VCR, DVD player, CD player and Xbox in my den.”

With the exception of Dreze, who predicts that a clear winner will emerge in six months to a year, most experts expect a long battle between HD-DVD and Blu-ray. “These groups have huge corporate egos and major financial issues at stake and at least for now, it appears that this dual battle will go on for some time,” says Bajarin.

The one wild card is a high-definition DVD player or discs that feature both formats. According to Bajarin, such a player would ease consumer fears and spur some demand. However, Bajarin notes that a multi-format player is “by no means the optimal way to approach this problem. The ideal solution is for the two groups to come together, like they did with the CD formats, and create a single player/recording format or platform that meets the needs of all consumers.”

But cooperation between the two parties underestimates the corporate needs of Sony and Microsoft. The goal for each: Relegate the other’s format to Betamax-like obscurity. “I suspect it will be a while before either of the two high-definition DVD formats folds up shop, as Betamax did,” says Werbach. “Sony will probably be the last to give up, because it will ship millions of Blu-ray drives in the next few years with the Playstation 3. But it will be something of a Pyrrhic victory.”