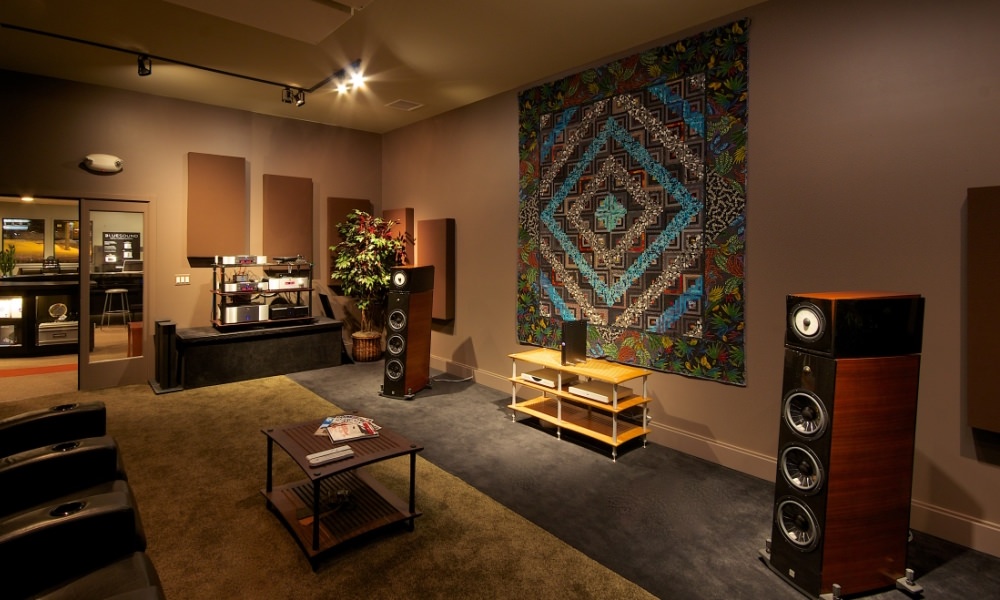 At the Home Entertainment Show 2007, held in May in New York City’s Grand Hyatt Hotel, and sponsored by Stereophile and Home Theater magazines, one of the more interesting demonstrations let show attendees and the press hear and compare the combined effects of special room treatment and digital parametric equalization in one hotel room while across the hall was a virtually identical room with no treatments applied.

What made the demonstration better than most was the presence in each room of identical loudspeakers and playback equipment with the music samples delayed and synchronized in a way that let you audition one music selection in the untreated room, then scamper across the hall just in time to hear the same musical selection played back in the treated room. Assuming you sat or stood in the same relative position in each room, the demo afforded an almost immediate controlled comparison of two listening environments. While I would have preferred to compare the effects of the room absorbers and treatments without the assistance of parametric EQ in the treated room, the demo nevertheless presented an unusual comparison that would be impossible to conduct in your own home.

High End Components
The stereo playback components were very tweaky and “high-end” — Talon Thunderhawk loudspeakers ($25,000) with a VAC Alpha vacuum-tube integrated amplifier ($10,000), a Wadia 581i disc player ($9,450), plus an assortment of exotic cables and isolation stands that added an additional $10,000 or so to the total.

The treated room used an RPG freestanding Variscreen ($700) absorber — a hinged upholstered panel with variable acoustic properties — a “broad bandwidth absorber” on one side and a “flat binary amplitude diffsorbor” on the other. The latter is adjustable with a “Variable Depth Air Cavity” that is said to control low-frequency modal problems.

In addition, a Modex plate ($1,000) — a damped metal plate system — was surface mounted in the treated room. Developed at Germany’s Institute for Building Physics at the Fraunhofer Institute (Europe’s largest applied research organization), the Modex plate claims to offer low-frequency absorption from 50 Hz to 500 Hz with a thickness of just 4 inches.

How Did They Sound?
Certainly the two rooms sounded different, and depending on the musical selections, you could come to a conclusion of which room you preferred. On the orchestral works, I slightly preferred the treated room. On a live jazz recording done in a club atmosphere, I liked the untreated room better, because the natural room reflections seemed to enhance the realism of the recording. Heard in the treated room, the jazz selection seemed more intimate, close up and dry–and somewhat less realistic to my ears.

Controversy
Still, the demonstration was worthwhile in the continuing discussion and controversy over room treatments–how much is too much? It also raises interesting questions about how we perceive room acoustics and how they relate to the realism of reproduced music. Should the acoustics of our living room or home theater be entirely negated and deadened in order that we hear only the ambience (or lack thereof) present in the original recording?

But what about entirely artificial studio-produced rock and pop recordings? For those, no real “room” or natural ambience exists, apart from the left-to-right stereo soundstage which is often artificially created with pan pots that electronically position a singer or instrument at a particular point across the stereo soundstage (at its worst, this is sometimes referred to as “multiple mono”). Sometimes digital reverberation, courtesy of Lexicon, is added to make the recording sound less dry. Vocalists are often acoustically isolated from the musicians in a small “booth” and close-miked to prevent “bleed” from other instrumental sounds and to remove the singer from any natural reverberance in the studio.

Should we listen to such recordings combined with the natural reflections or acoustics of our listening room, or hear the source exactly the way it was recorded, with no additional “acoustics” –good or bad–imposed on the playback?

The Question
It’s an interesting philosophical question about music reproduction. At a fundamental level, whether we listen in stereo or multi-channel surround sound, we are seeking to create an auditory illusion–either of musicians performing in our home or within a particular acoustical space. Should the recording transport us to the ambient space of the recording? In the case of concert-hall, jazz-club and rock-concert recordings, I think most of us would agree that’s the goal.

But what of performers intimately recorded in a dry studio setting? I believe we want the illusion of those performances and musicians transported to our own listening room. Should our home theaters or living rooms, therefore, be part of that process? I rather think they should–but of course that does mean that the recording will sound somewhat different in every room it’s played in.

Conversely, should we use every means at our disposal to absorb and eliminate any of the specific reflection modes our rooms generate in order to hear exactly what the recording engineer, artist and recording producer put on the master tape? If you follow through on that argument, then why not simply listen on headphones and eliminate your listening room’s liabilities entirely?

Obviously, headphone listening has its own peculiar artificiality, with vocalists centered in the middle of your head and the musicians spread from ear to ear. Granted, it has its own intimate appeal, and is wonderful for portable listening and travel, but it does not effectively recreate a 3-dimensional space of the kind we often experience with great multi-channel recordings and even some stereo playback.

It’s all very well to control and try and smooth out the worst bass standing waves from room modes, and this is a worthy goal. But I’m convinced that a room’s natural acoustics –by which I mean a room with a typical mix of absorbent and reflective surfaces–mostly contribute to the realism of reproduced music. And this realism may be further enhanced by the spatial qualities of the loudspeaker. The first and secondary reflections may add a natural airy and open quality to the music, particularly if the speakers have smooth off-axis lateral dispersion. (That means that musical sounds heard at angles away from the speaker will resemble the tonal balance of the same sounds heard directly in front of the speaker, and that the speaker will smoothly radiate sounds across the musical spectrum at various angles into the room.)

Singers and Instrumentalists
In real life, musical instruments and vocalists radiate sound in every direction, albeit with some bias to the direction that the singer or instrument’s bell or horn is facing. Does it not follow that if a speaker is reproducing those sounds, it should attempt to roughly simulate the dispersion patterns of the original musical sources? (It’s one of the reasons that the most realistic sounding surround speakers like Axiom’s QS8s use multiple drivers, so they can mimic the delayed reflections that occur in larger halls, theaters, and outdoor settings.) If you overtreat a room to soak up most of those delayed reflections, you kill off some of the realism and sense of envelopment in an acoustic space.

In addition, we each subconsciously “know” and are familiar with the naturally occurring reflections of our own listening room, because we live there. Admittedly, the time delays involved in most domestic rooms are much shorter compared to those encountered in larger clubs, halls and concert halls in which musicians perform. But our brains and hearing mechanism are still acutely sensitive to these delays and process them along with the ambient delays present on many recordings to lend a sense of realism to the illusion that’s taking place in the listening room.

This isn’t meant to be the definitive guide to listening rooms; rather, it’s a presentation of the complex arguments on both sides. My own bias is undoubtedly apparent, but I hope the foregoing stimulates your own thoughts about how we hear and appreciate recorded music in our homes.