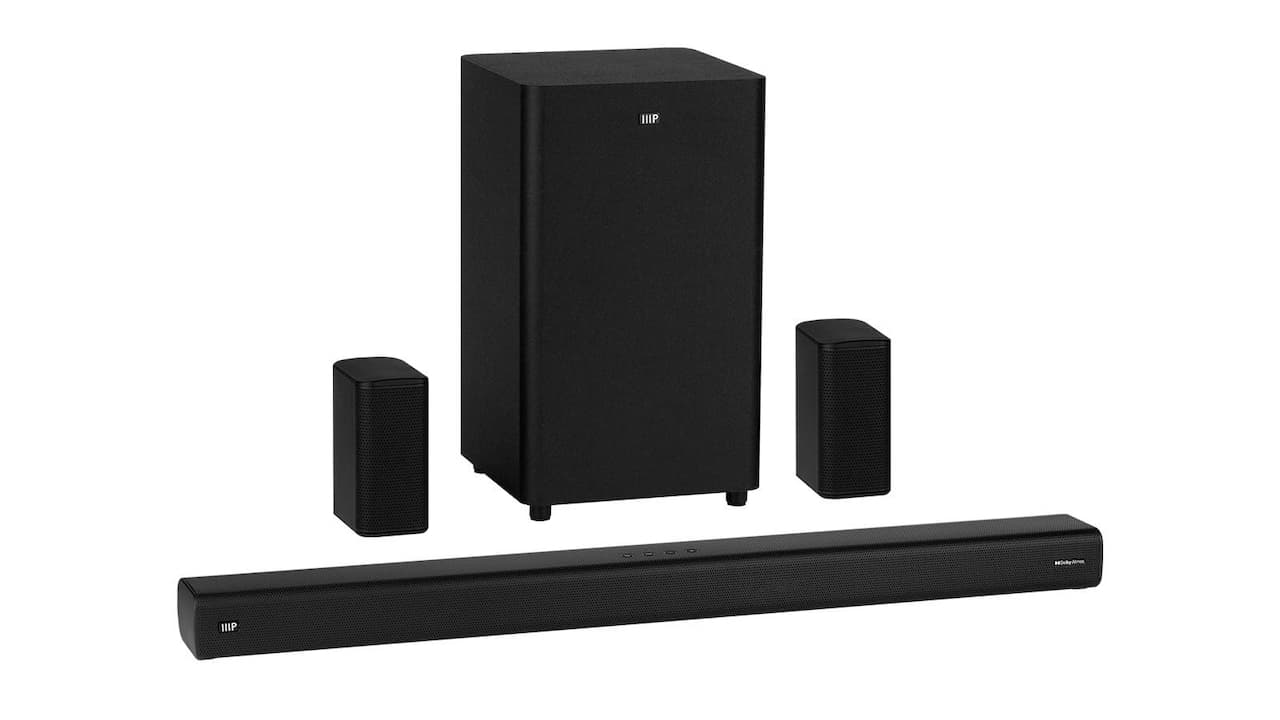 With the poor sound quality of most TV speaker systems, many consumers opt to purchase a soundbar to get better sound for watching movies and TV shows without taking up a lot of space or adding to wire clutter.

You can find basic two-channel stereo soundbars, to soundbars that cram in almost as many features as a home theater surround sound system that includes a lot of speakers. Add to that a wide range of prices, it isn’t always easy to decide which soundbar is right for you.

Let’s check out what the Monoprice SB-600 soundbar system offers.

The Monoprice SB-600 is a 5.1.2 Soundbar system featuring Dolby Atmos that includes, in addition to a soundbar, an 8-inch ported Wireless Subwoofer and semi-Wireless Surround Speakers.

The Monoprice SB-600 Soundbar is 41-inches wide making it a good match for just about any TV screen size. It can be stand/shelf or wall-mounted.

The SB-600 provides connectivity for additional sources as well as easy connection options for getting sound from your TV. Several sound modes are included as well as Dolby Atmos compatibility.

The connections provided by the SB-600 Soundbar include:

The SB-600 comes with a remote control that is divided into three sections.

The top section includes power and input select buttons. Next are the playback controls when playing Bluetooth or USB content.

The center section includes the volume and tone (bass/treble) controls.

There are also onboard controls located on the top center of the soundbar that includes Power, Input Select, Volume Down, and Volume Up.

An LED display is provided on the front of the soundbar that displays the source selected and sound mode options. This display is placed behind the grill, which means that the LED lights have to pass through the grill which sometimes makes the outline of some letters and numbers hard to make out from a distance.

The soundbar is also compatible with many universal remotes and some TV remotes for access to basic functions (Volume, Mute, and Power).

Here are all the additional things the SB-600 comes with to get you started:

After unboxing the soundbar and accessories, here is how to set up the SB-600 soundbar system.

Note: The subwoofer provided with the SB-600 has a downward-firing driver – make sure that nothing is protruding from the floor where you set it down.

Note: The Left channel speaker contains the amplifier and signal distribution for both surround speakers.

HDMI-ARC and eARC transfer audio from your TV (including the audio from devices connected to your TV) to the soundbar. This means you don’t need a separate digital optical or analog audio connection from the TV to the soundbar for audio. ARC passes stereo and Dolby Digital audio, eARC passes additional surround formats, including Dolby Atmos.

The SB-600 has enough power to fill a 15 x 20-foot room with two-channel sound for music and surround sound for movies.

The SB-600 also has two vertically firing speakers (that’s where the .2 means in 5.1.2) housed in the soundbar that support Dolby Atmos.

When Dolby Atmos is detected or vertical surround is activated via the remote, there is a definite expansion of the soundfield up and out.

I found that “overhead” sounds were not as precisely located as they would be with Dolby Atmos and vertical surround execution if the setup included speakers placed overhead.

Unfortunately, the effect is not adjustable, which would have been nice to accommodate different ceiling height distances since when using upfiring speakers for Dolby Atmos, the sound needs to reflect off the ceiling and back down to the listening position to be effective.

In addition to Dolby Atmos, the SB-600 provides several audio settings that allow you to tailor the sound further. There are four preset EQ modes: Voice, Sports, Movie, Music.  Other settings include Bass, Treble, Vertical Surround (on/off – but not adjustable).

The subwoofer is rated with a low-end response of 40Hz. I found that it does deliver solid bass output down to that point, but is still audible down to 35Hz although with a significant drop-off.

However, unlike the center and height channel, the sound output levels of the surround speakers are adjustable via the remote which can be used to provide a better surround sound balance, based on your preference.

I didn’t have any AV Sync issues, but the SB-600 does provide a variable AV synch (Audio Delay) adjustment if needed.

The SB-600 supports Bluetooth ver 4.2 (A2DP, AVRCP). You can use Bluetooth to play music wirelessly from compatible devices, such as smartphones. This means you can listen to your favorite music streaming services that are installed on your phone.

The SB-600 system does not support Apple AirPlay. However, you can connect an Apple TV media streamer to one of the HDMI inputs, then use its  Apple Airplay capabilities. The same thing does for Google Chromecast for Android phones.

The 41-inch wide soundbar fits under most TVs without blocking the bottom of the screen. You can also wall-mount the soundbar (hardware is provided) if desired.

The SB-600 system works with any TV that has an analog stereo output, digital optical output, or HDMI-ARC/eARC connection.

Once I plugged in everything and powered the system on, the soundbar instantly paired with the wireless subwoofer and surround speakers. However, should you have difficulty, and manual pairing option is provided.

The performance of the Monoprice SB-600 Soundbar is mixed. It sounds great for two-channel music and center channel dialog and vocals are clear. However, it could have sounded better if it had separate center and height channel level controls so that you could balance all the speakers more accurately. There is no automatic room correction feature provided.

The Monoprice SB-600 Soundbar is available for $329.99 direct from Monoprice.

Also, check out our review of the Monoprice SB-300 soundbar as well as our listing of Best Soundbars. 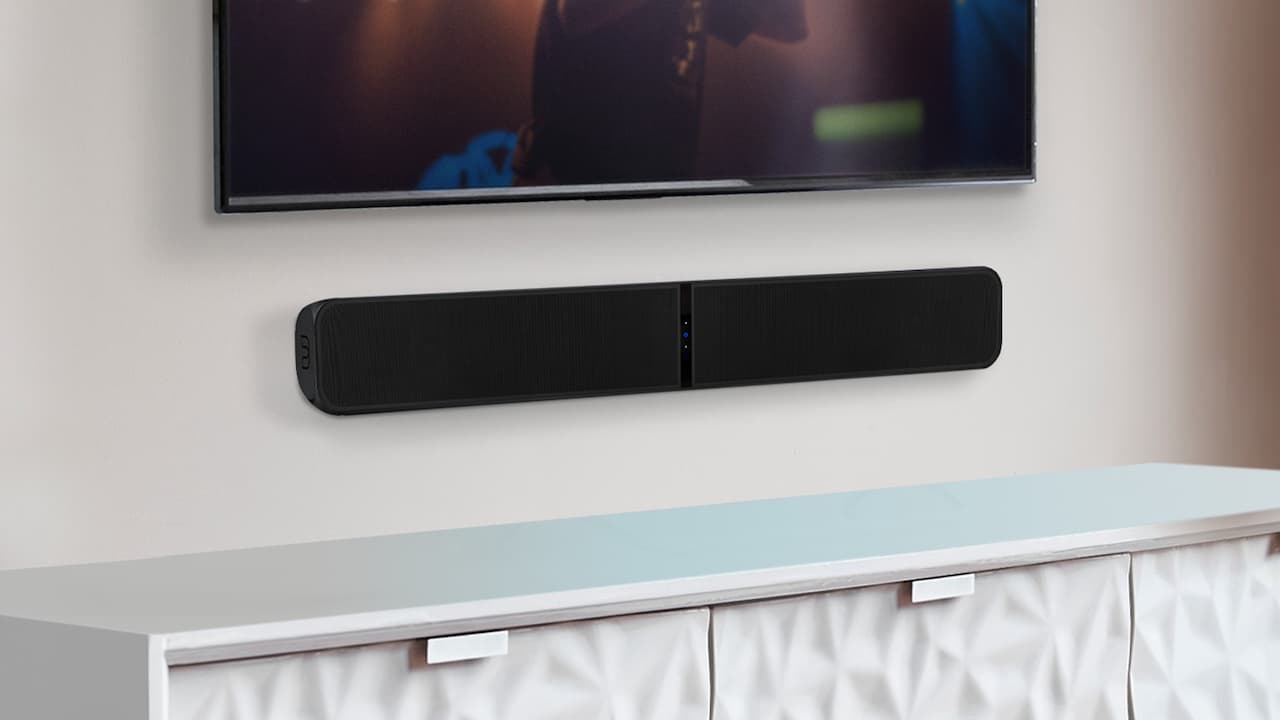