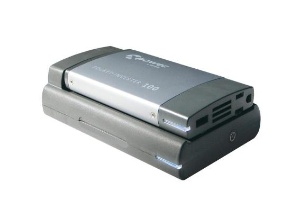 VANCOUVER, British Columbia – Xantrex Technology Inc. (TSX:XTX) today introduced the XPower Pocket Powerpack 100, a lightweight battery and inverter combination that can operate or recharge a wide range of mobile consumer electronics products through alternating current (AC), or direct current (DC) from a universal serial bus (USB) power outlet. The portable Powerpack weighs less than 2.4 pounds, fits easily in a laptop bag and can recharge a Blackberry™ 30 times, an iPod™ 20 times, a cell phone at least eight times, or can provide up to 2.5 hours of additional runtime for most laptops without plugging into an outlet.

“There has been an explosion of personal portable devices in the market. Today’s business traveler might have a notebook, a cell phone, an MP3 player or more, but keeping them all powered up — and traveling with multiple adapters — is challenging,” said Avi Greengart, principal analyst of mobile devices for research firm Current Analysis. “There is a clear market need for more flexible and portable power solutions.”

“If people constantly need to recharge mobile devices at stationary outlets, they effectively lose the benefit of mobility,” says Grant Dunbar, Xantrex product marketing manager, retail markets. “We’ve spent years developing the best portable power products on the market and have sold more than one million to date. We’ve leveraged that experience to develop the Pocket Powerpack 100, a first-of-its-kind product that addresses the increasing power needs of the world’s most popular mobile devices.”

About Xantrex
Xantrex Technology Inc. (http://www.xantrex.com) is a world leader in the development, manufacturing and marketing of advanced power electronic products and systems for the distributed, mobile and programmable power markets. The company’s products convert raw electrical power from any central, distributed, or backup power source into high-quality power required by electronic and electrical equipment. Headquartered in Vancouver, British Columbia, the company has facilities in Arlington, Washington; Livermore, California; Elkhart, Indiana and Barcelona, Spain. Xantrex is publicly listed on the Toronto Stock Exchange under the ticker symbol “XTX”.