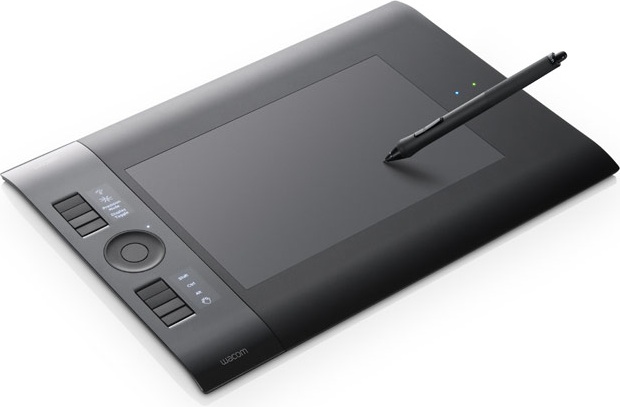 Today, Wacom announces the Intuos4 Wireless professional pen tablet, a highly-anticipated product featuring Bluetooth wireless technology. The new Intuos4 Wireless is expected to be warmly embraced by photographers, designers and artists who seek the freedom of wireless technology as well as the control and comfort benefits inherent in Wacom’s professional line of pen tablets. The liberating experience of being able to move about the room and work “unattached” from a computer also makes the Intuos4 Wireless an excellent choice for collaborative work sessions, client presentations or use in a seminar setting such as an art class or photography seminar. In addition, the medium-sized Intuos4 Wireless fits easily into most computer laptop bags, making it a wonderful input solution for mobile creative professionals and students.

“Professional and serious creatives are drawn to the intuitive nature and overall experience offered by the Intuos4,” says Don Varga, senior product manager for Wacom’s line of professional branded products. “By combining the successful Intuos4 pen tablet design with Bluetooth wireless technology we are able to provide users with the flexibility and freedom to work in the most comfortable way for drawing, editing, painting, retouching or general computer work.”

The Intuos4 and Bluetooth
Bluetooth wireless technology is a global communications standard found in millions of computers and mobile devices that allows these devices to communicate reliably over distances of up to 33 feet. Ideal for home, office, classroom or remote-meeting use, the Intuos4 Wireless provides mobility and freedom when working with Bluetooth-enabled desktop or laptop computers. The Intuos4 Wireless features convenient USB charging directly from the computer.

The Intuos4 Grip Pen
The Grip Pen that comes with the Intuos4 Wireless features Wacom’s proprietary Tip Sensor technology, offering users near-zero (one gram) starting pressure for the most sensitive Intuos pen tablet performance to-date. “Now, pressure-sensitive support can start with an incredibly light touch, about one gram, emulating the same feel, response and result derived from working with traditional creative tools such as brushes, markers and pens,” said Don Varga. Additionally, the Intuos4 Wireless pen has 2048 levels of pressure, doubling the resolution of the pen’s pressure curve to further enhance feedback and expand creative control within software applications that support pressure sensitivity. The Grip Pen also features a pressure-sensitive eraser and two customizable side switches that can be set for commands such as double-click and right-click. The Intuos4 Wireless ships with a handy clip-on pen holder for securing the pen to the tablet when not being used.

Breakthrough Design Improves Workflow, Boosts Productivity
Whether on the road, at home or at work, the slim and ergonomic design of the Intuos4 Wireless pen tablet makes it the ideal creative instrument for working with digital content in comfort. Available in a single size (medium) only, the Intuos4 Wireless has an asymmetrical design that puts the Touch Ring and the customizable ExpressKeys™ on one side of the tablet, making them all available to the user’s non-dominant hand. The application-specific ExpressKeys are instrumental in helping improve workflow and boosting productivity by placing commonly-used commands right at the user’s fingertips. Illuminated (OLED) displays provide helpful reminders as to the function of each ExpressKey. These settings are application-specific and the displays will immediately update as the user changes between applications. To switch the tablet from right-handed to left-handed use, the user simply rotates the tablet 180 degrees and changes the orientation of the illuminated icons within the Wacom Tablet driver software.

The Touch Ring on the Intuos4 Wireless is capable of controlling up to four different functions in any application. A button located in the center of the ring “toggles” the ring between application-specific functions such as zoom, scroll, brush size adjustment or canvas rotation. The position of the illuminated LED located along the perimeter of the Touch Ring indicates the current function. “The Intuos4 Wireless design carries form and function to new heights,” says Varga. “Never before has a Wacom pen tablet so elegantly provided such tangible workflow, productivity and wireless freedom.”

Intuos4 Wireless Pen Stand
A weighted desktop pen stand not only provides a convenient pen holder, but also functions as a twist-off storage compartment for pen nibs and has a handy nib removal tool inside. Standard, felt, stroke and flex nibs ship with the Intuos4 Wireless, allowing users to simulate the feel of working with a variety of traditional art and design materials.

Noteworthy Accessories
In order to provide the best pen tablet experience possible, Wacom has created a line of accessories that includes several different types of pens. For example, the newly designed Art Pen supports the barrel rotation feature within such applications as Adobe Photoshop, Illustrator and Corel Painter 11, allowing users to create natural brush effects by rotating the pen, much like a calligraphy pen. The Intuos4 Airbrush has a similar form and wheel-based control as a traditional airbrush, providing creative, fun effects when combined with select applications. All Intuos4 accessories can be purchased at direct.wacom.com.

Availability
The Intuos4 Wireless ($399 USD) is intended to begin shipping in the United States and Canada in late February or early March. The tablet is scheduled for launch in Mexico and other Latin America countries in subsequent months. Consult your local electronics retailer or visit www.wacom.com for the most current information.

About Wacom
Founded in 1983, Wacom’s vision to bring people and technology closer together through natural interface technologies has made it the world’s leading manufacturer of pen tablets, interactive pen displays and digital interface solutions. The advanced technology of Wacom’s intuitive input devices has been used to create some of the most exciting digital art, films, special effects, fashions and designs around the world and provides business and home users with the ability to explore digital content creation in a comfortable, natural way. Today, millions of customers use Wacom’s cordless, battery-free, pressure-sensitive pen technology to express their creativity.

What Digital Camera12 years ago
You Are Here